Of course, the old proverb refers to the fact that the weather is usually cold at the beginning of the month and then gradually warms up into spring.

But the weather isn’t the only notable change that March brings.

In ancient history, the ides of March was the 74th day in the Roman calendar. It corresponds with our March 15.

The day was marked by religious observances and was known as a day to settle debts.

In 44 B.C., the date became notorious for the assassination of Julius Caesar.

This was a major turning point in both Roman history and the history of the world.

For stock market investors, will the ides of March bring about a change to the current drawdown?

This Is Shaping Up to Be a Historic Year

Growth investors have felt a lot like Julius Caesar this year.

The stock market is off to its fourth-worst start to a year in the past century. 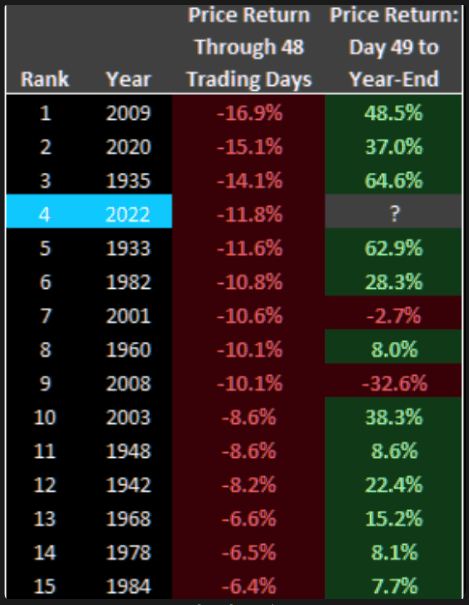 The only years that stocks got off to a worse start were the Great Depression, the 2008 financial crisis and the coronavirus crash.

This is shaping up to be a historic year.

It started with the highest increase of inflation in 40 years.

Then the Federal Reserve blindsided investors by admitting it was wrong about inflation.

To make matters worse, Russia’s invasion of Ukraine is sending the prices of commodities like oil, wheat and nickel skyrocketing.

But here’s some good news for investors to think about.

When the market starts the year in a steep decline, it typically stages a strong rally throughout the rest of the year.

Out of 14 other occurrences with heavy sell-offs to start the year, the market came roaring back in all but two of them.

And the rallies are even higher after the market has been hit the hardest.

I clearly remember how the bears predicted doom and gloom in 2009. But the market rebounded 48.5% as the global financial crisis waned.

I also wrote on these pages two years ago that 2020’s sell-off would lead to a sharp rally in everything.

I called it the “mother of all bubbles” back then. The market rallied 37% the rest of the year.

There’s Blood on the Streets

Today, the events are different. But the sentiment is the same.

There’s a different reason for every bear market, but it always involves the decisions of irrational humans.

To quote the French writer Jean-Baptiste Alphonse Karr, “Plus ça change, plus c’est la même chose,” — the more things change, the more they stay the same.

Investors are worried about war.

They’re worried about a hawkish Fed.

But these concerns are largely priced in.

This is a sell-off for the history books. There’s blood on the streets.

The Fed sees this. And I expect it to acknowledge how events have changed its outlook in its meeting this week.

The investors who should “beware the ides of March” this year are the bears.

Incannex Healthcare Ltd. (Nasdaq: IXHL) engages in the research, development and sale of medicinal cannabinoid products in Australia. The recently public stock skyrocketed 240% after releasing positive data from a Phase 2 trial of a cannabinoid combination product for obstructive sleep apnea.

RLX Technology Inc. (NYSE: RLX) designs, manufactures and sells vaping and vaping-related products in China. The stock is up 26% on a rebound along with other Chinese stocks following a sell-off Monday on the news of widespread COVID-19 lockdowns in China.

Sonendo Inc. (NYSE: SONX) develops, manufactures and commercializes devices for less invasive and less painful root canal therapy. It is up 23% after hitting a new milestone in the number of patients who have undergone root canal therapy using its GentleWave System.

Hollysys Automation Technologies Ltd. (Nasdaq: HOLI) provides automation and control technologies and applications in China. The stock jumped 22% on the news that Beijing Infrastructure Investment, the state-owned operator of Beijing’s railway and subway, is considering a buy-out bid for Hollysys that could value the firm at as much as $1.9 billion.

Butterfly Network Inc. (NYSE: BFLY) develops, manufactures and commercializes ultrasound imaging solutions. It is up 21%, bouncing back from a week-long sell-off after Fujifilm Sonosite filed a patent infringement lawsuit against Butterfly Network.

Aveo Pharmaceuticals Inc. (Nasdaq: AVEO) develops and commercializes medicines for cancer patients. The stock is up 20%, continuing its rally from Monday when it delivered a great fourth-quarter report that was driven by the growth in sales of its renal cell carcinoma treatment.

New Oriental Education & Technology Group Inc. (NYSE: EDU) provides private educational services under the New Oriental brand in China. It is another Chinese stock that is up 20% on a rebound from Monday’s lockdown-fueled sell-off.

DocGo Inc. (Nasdaq: DCGO) provides mobile health and medical transportation services for various health care providers. The stock is up 15% after reporting record financial results for the fourth quarter thanks to the high demand for its services.

GDS Holdings Ltd. (Nasdaq: GDS) develops and operates data centers in China. It is yet another Chinese stock that is up 14% along with the others as they recover from Monday’s sell-off.

Co-Diagnostics Inc. (Nasdaq: CODX) is a molecular diagnostics company that develops, manufactures and sells reagents used for diagnostic tests. The stock is up 12% after the company announced a $30 million share repurchase program.