Is Dogecoin the Next Bitcoin?

Home » Is Dogecoin the Next Bitcoin?

Is Dogecoin the Next Bitcoin?

The world’s 12th-largest cryptocurrency by market cap started as a complete joke.

Dogecoin was created in 2013 by a couple of bitcoin developers with a sense of humor. It’s based on a popular internet meme of a shiba inu dog with a judgmental look. 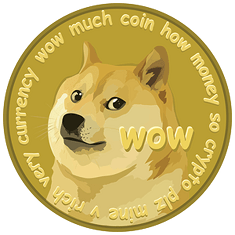 However, unlike its predecessors, Dogecoin has unlimited supply. There is no scarcity value, and there are currently over 128 billion coins in circulation.

A few weeks ago, Tesla CEO Elon Musk tipped off a 600% rally after he tweeted: “Dogecoin is the people’s crypto.”

To this he added: “No highs, no lows, only Doge,” and shared a Lion King meme of himself as the monkey Rafiki holding up baby Simba with a Doge head. 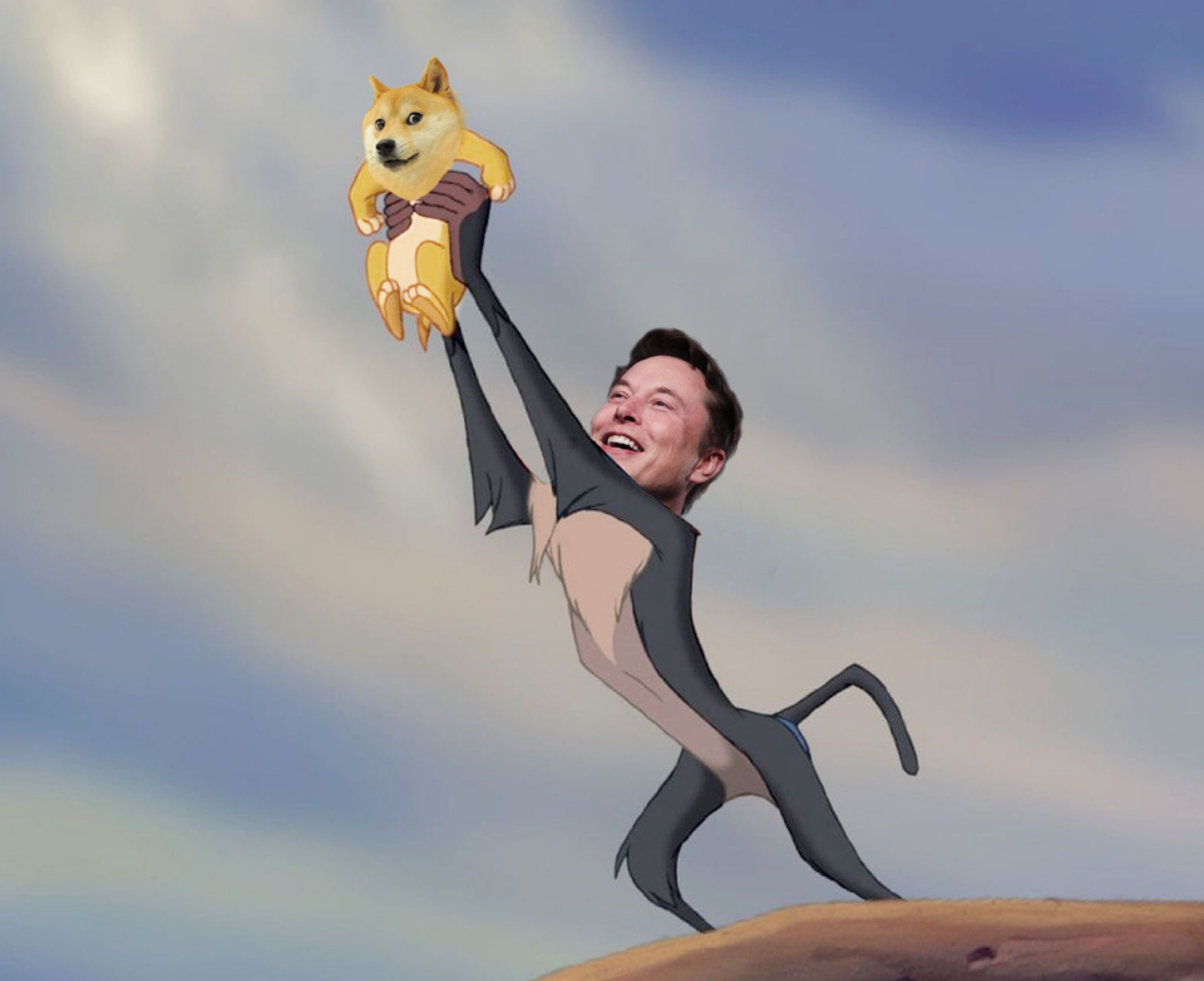 The rally continued as a number of celebrities — including Snoop Dogg, Gene Simmons and one of the Jonas Brothers — took to social media to show their support.

The hashtag #DogecoinRise was even trending on Twitter with over 32,000 recent tweets.

At $7.8 billion, Dogecoin’s market value is still one-hundredth of bitcoin’s, so the chances of it eclipsing bitcoin any time soon are highly improbable.

While there might be a few more fools waiting to buy at higher prices, a “rug pull” is highly likely. This could lead to a sharp pullback of over 50% as speculators rush to the exits.

And it turns out that Musk was joking about Dogecoin the whole time. (You would think he’d learned his lesson about joking about investments already.)

Musk’s flirtations with Dogecoin were a tipoff to his real intention. And Tesla’s big announcement on Monday is sending shockwaves across the entire crypto universe.

On Monday morning, Tesla filed with the Securities and Exchange Commission (SEC), announcing the company now owns $1.5 billion in bitcoin. That amounts to about 8% of its $14.5 billion in cash held at the end of 2020.

There’s been speculation on Tesla’s move for months. However, those hopes had all but faded away.

A prediction market contract priced a 91% probability that Tesla wouldn’t announce a bitcoin purchase before March 1. 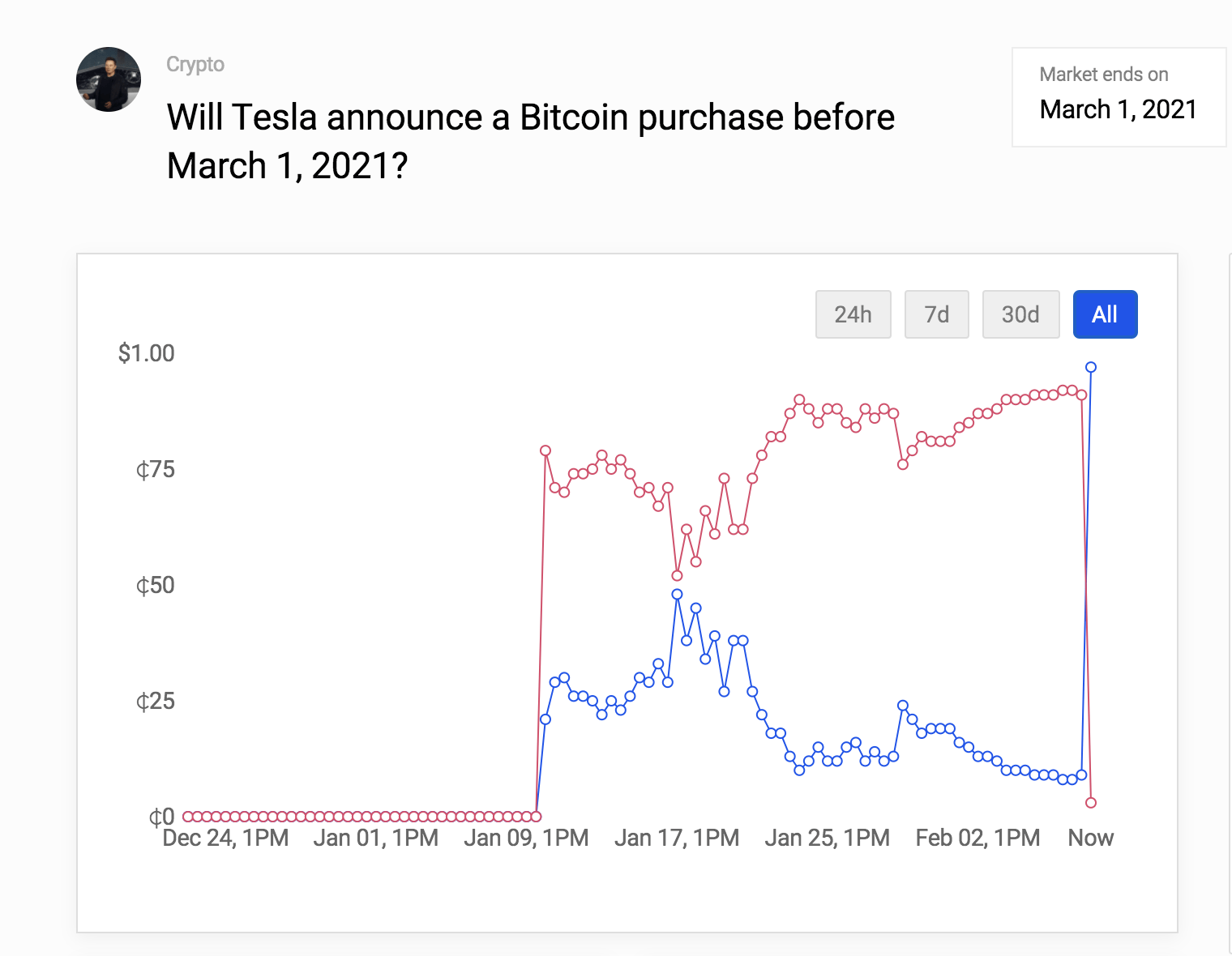 Even though Musk tweeted specifically about Dogecoin, he was also leaving clues that a bitcoin purchase might be happening.

He tweeted on January 29: “In retrospect, it was inevitable.”

Tesla is not the first company to invest in bitcoin.

As of last week, the company now owns 71,079 bitcoins, with the large majority purchased under $20,000. At current prices, the dollar value of its bitcoin holding is over $3 billion.

Square also purchased bitcoin last year, but a much smaller amount of $50 million.

“There’s a macroeconomic wind blowing — big — it’s going to impact $400 trillion of capital. That capital is sitting in fiat instruments that are being debased. That capital is going to want to convert into strong money,” said Saylor.

I take it Musk was listening.

Managing Editor’s Note: Four days ago, the entire crypto market hit a record $1.13 trillion … a jump of nearly 400% over the previous 12 months. In his new special presentation, Ian explains the four powerful catalysts that are sending cryptos to astronomical new highs. If you haven’t watched Ian’s presentation yet, I highly suggest you do so as soon as possible. — Jay Goldberg

The fact that corporations are starting to embrace bitcoin as a reserve currency is a huge step for the world’s largest cryptocurrency.

I predict that Tesla won’t be the last tech company to make a bitcoin splash. Watch what happens to prices when a Big Tech stock such as Amazon or Google buys bitcoin.

Ark Investment Management projects that if every company in the S&P 500 Index invested just 1% in bitcoin, its price would jump to over $80,000.

You should never go full bitcoin. But you want to make sure you’re sailing in the same direction as the rivers of corporate cash.