Home » Why I Told My Subscribers to Sell Tesla

When to buy is the easy part. When to sell is the hard part.

Earlier this month, we alerted Automatic Fortunes subscribers that it was time to sell Tesla Inc. (Nasdaq: TSLA) after the stock had run up almost 1,000% from our August 2019 entry price.

Our timing could not have been better. After selling the stock on September 1, Tesla plunged 34% over the next week.

I want to take this opportunity to say thank you for the great reader feedback, such as this email from one of my subscribers:

Thank you for the sell alert, as you nailed this one perfectly!!

So far, thanks to you, I was able to jack up my retirement about 50K. That may be an underestimation.

I still believe in Tesla, though.

I Still Believe in Tesla

I still believe Tesla has an insurmountable lead in the electric vehicle war.

And Tesla’s 908 U.S. Supercharger stations give it a distinct advantage over anyone expecting to take an electric vehicle on a road trip.

But all of those things were already priced into the stock.

That doesn’t mean that Tesla couldn’t still go higher. When it comes to irrational behavior among investors, I don’t count anything out.

I simply thought that the investors buying Tesla in August weren’t buying because of the stock narrative. They were buying because the price was going up every day.

Or as the kids say: “There’s lots of FOMO (fear of missing out) going on.”

On top of that, the amount of short interest has declined significantly: 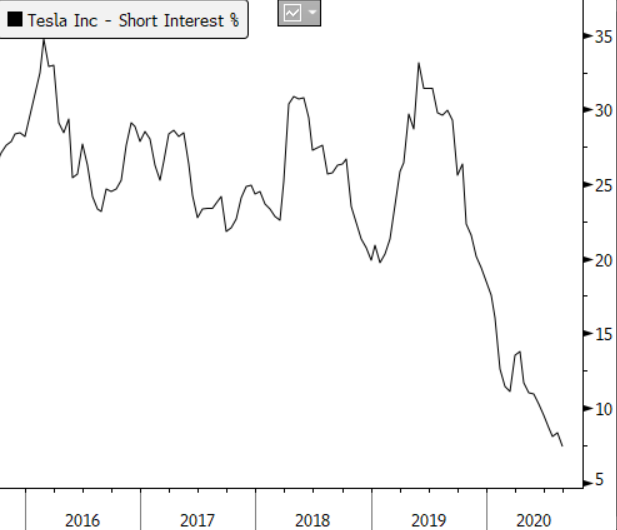 This is a contrarian signal because shorts make the stock go higher when they buy to cover.

Without those bears covering the stock when it drops, any bad news could send shares tumbling.

If you want to hear more about why we sold Tesla, check out my chat with my colleague Brian Christopher: