Bitcoin Is Back — Amazon-Like Gains Are Ahead

Home » Bitcoin Is Back — Amazon-Like Gains Are Ahead

Bitcoin Is Back — Amazon-Like Gains Are Ahead

Take a look at the blip on the left-hand side of this chart, circled in red… 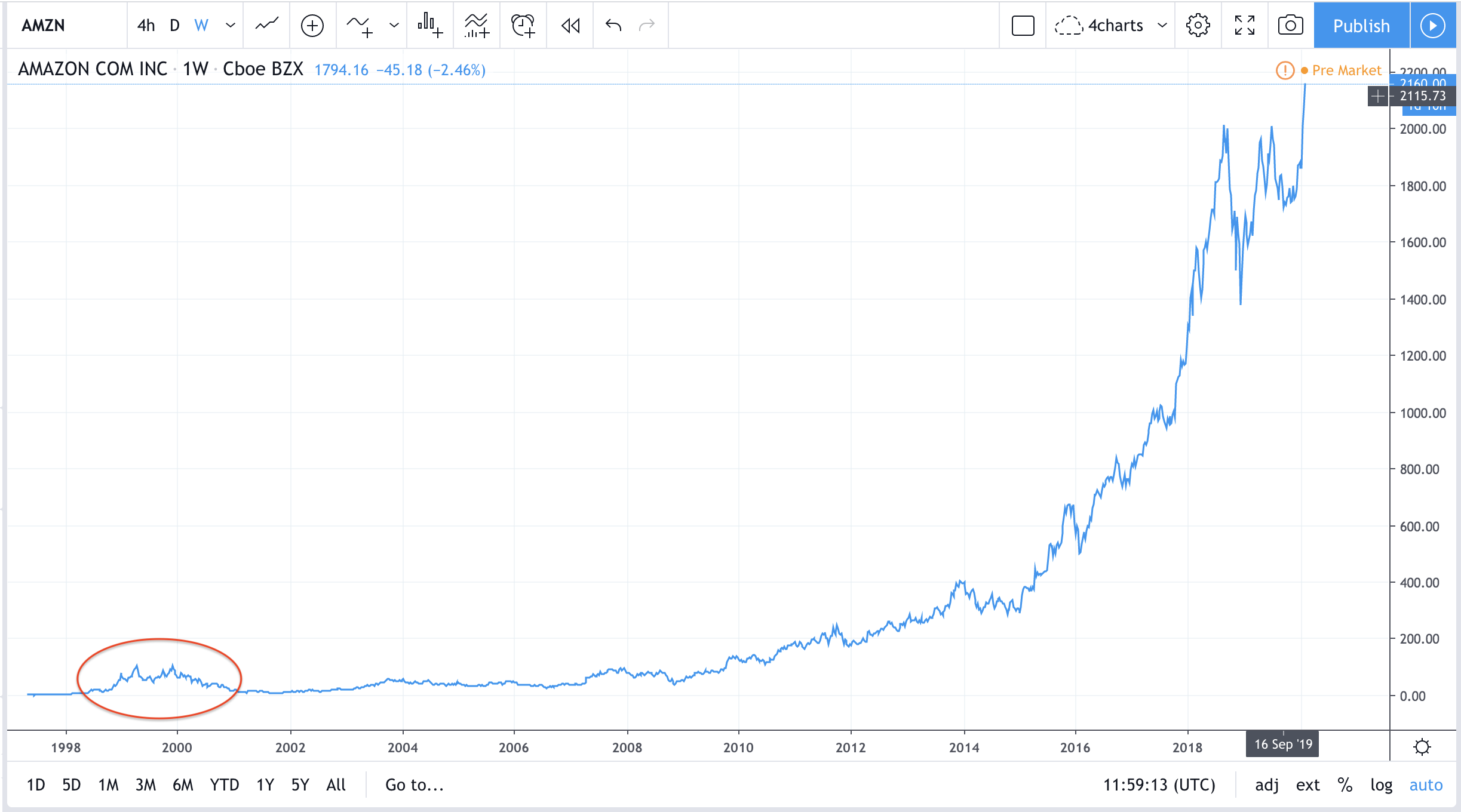 That’s what happened to Amazon during the dot-com bubble.

However, if you wandered into the dot-com rubble, your annual returns on Amazon are truly historic.

But back then, investors who had been burned in the dot-com bubble were reluctant to return to the tech markets.

They never believed that it would be the most disruptive force of the century.

Today, crypto land is starting to feel like dot-com did in 2001.

And we’re seeing a repeat of these same exact fears.

But innovators and entrepreneurs continue to build on crypto networks.

Venture capitalists are still financing new projects, and institutions are slowly moving into the market.

While that won’t bring back the mania overnight, I suspect the best crypto assets will follow Amazon’s growth trajectory over the next few decades.

The Internet Disrupted Everything

The internet reunited us with third grade classmates, provided answers to any obscure question and helped us purchase vacuum cleaner parts that weren’t found in local stores.

Every great internet company is a platform to connect users with:

Each of these platform businesses relies on trust.

For instance, when you buy something off Amazon, you have recourse if the item arrives damaged. You can call Amazon and complain, and it’ll send you a refund.

The same goes for Uber. Riders are OK with jumping in the back seat of a stranger’s Toyota Camry because Uber keeps track of the driver’s reviews.

This creates a layer of trust around the economic transaction.

The biggest internet businesses all do something really simple: They allow two parties who don’t know each other to engage in economic commerce.

This concept has changed the world, disrupting everything from retail and transportation to lodging and banking.

And now, cryptos are taking it one step further.

The world’s first cryptocurrency, bitcoin, allows for a peer-to-peer exchange of a unique digital asset.

Bitcoin is a distributed ledger technology — it keeps track of who owns what.

Think about how you send money over the internet today. There’s always a middleman.

If you use Venmo, then PayPal has to confirm the transaction.

If you send dollars via the Zelle network, your bank confirms the transaction.

With bitcoin, the intermediary is cut out of the transaction.

Crypto solves the trust problem. It gets rid of the middleman, meaning users don’t have to rely on Uber or eBay to engage in economic commerce.

Most of these decentralized platforms are still 5 to 10 years away, however. But others are closer than you think.

Cryptos Are the Future of Finance

The Maker DAO protocol allows users to trade their cryptocurrencies for a “crypto dollar” that’s pegged to the U.S. dollar.

You can then use this crypto dollar in the burgeoning space of decentralized finance (DeFi).

One use of these crypto dollars is underwriting decentralized loans and mortgages.

And the DeFi space just hit a huge milestone.

It was recently reported that $1 billion has been committed to projects that swap one kind of crypto for another via a smart contract.

That’s up sharply from $700 million in December.

What’s Next for Bitcoin

Earlier this week, bitcoin soared above the $10,000 mark.

The cryptocurrency is already up more than 40% since the start of the year. And it isn’t showing signs of slowing down anytime soon.

It won’t be long before investors realize that bitcoin is back.

P.S. I’m constantly looking for massive tipping-point trends such as bitcoin to give my readers of Automatic Fortunes service a chance at Amazon-like gains. To learn more, click here.

← Buy 10 “Small Dog” Stocks to CRUSH the MarketWalmart vs. Amazon: Clash of the E-Commerce Giants →