It’s been a year for the history books…

If you closed yourself off in a remote cabin in the woods on New Year’s Eve, you would have missed out on the most eventful year in decades.

Americans were confined to their homes. Tens of millions hit the unemployment rolls. Protest marches and riots broke out in major cities.

Things have calmed down … for now.

But don’t let the “dog days of summer” lull you to sleep.

Rest up now … because the rest of the year will be filled with fireworks as we inch closer to a coronavirus cure, host a presidential election and fully reopen the economy.

The Dog Days of Summer Are Here

Even though the market has been historically volatile this year, it appears we are in the midst of a seasonally slow period, the dog days of summer.

This occurs every year between July 22 and August 22. The Greeks and Romans called them the “dog days” because it’s the time when Sirius, “the dog star,” appears to rise just before the sun.

It’s also the hottest time of the year, which connects it to drought, sudden thunderstorms, lethargy, fever and mad dogs.

In modern times, these hot summer days are also when most hedge fund managers and traders take summer vacations.

Trading volumes taper off as decision-makers head to the beach or the mountains.

There are signs that the dog days are upon us. For the past couple weeks, the market has traded in a tight range.

The Volatility Index (VIX), which tracks expected volatility of the S&P 500, is at its lowest level since February. That’s before the coronavirus sent the market tumbling: 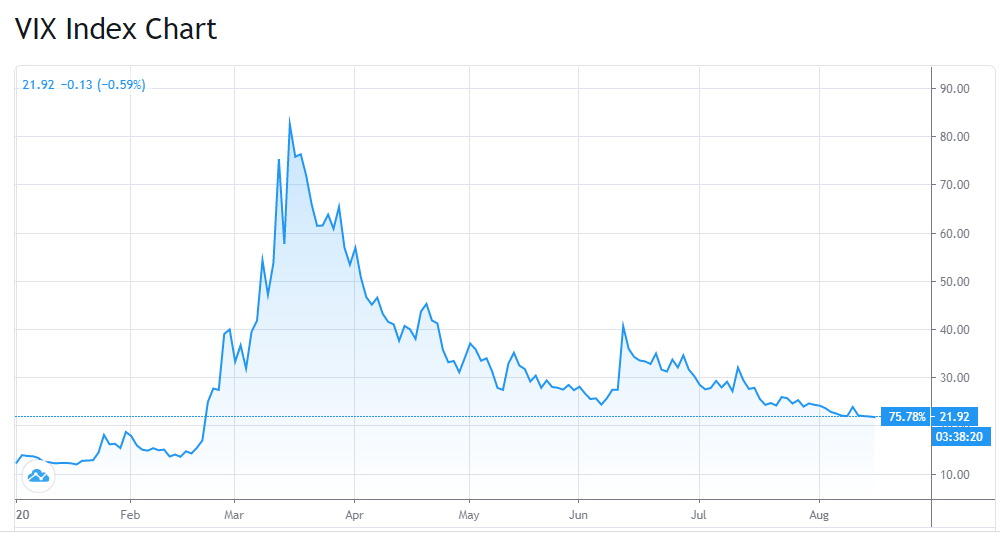 Apple, Amazon and Facebook earnings came and went with a yawn.

The Federal Reserve heads met and, as everyone expected, didn’t change their tune on interest rate policy.

I expect this sideways grind to continue for the next couple of weeks as traders take a much-needed breather.

But don’t bet on the markets staying this calm for long.

An Unconventional Way to Invest

When some investors see volatility, others see opportunity.

My trading desk had a saying in volatile markets: “Buy the dips and sell the rips”.

Volatile markets are not the time for long-term investing.

That’s why I’m excited that my colleague Mike Carr is holding a webinar to help everyday investors take advantage of the market’s volatility.

If you do what everyone else does, such as looking at price-to-earnings ratios and simple indicators, you’ll wind up with the same results as everyone else.

It also highlights short-term trades that minimize risk, letting you get in and get out to preserve and protect capital during volatile times.

You can check out Mike’s new strategy later this week for free by signing up here.

← The Housing Boom Is This Summer’s Biggest TrendTesla vs. Google: Race to $5 Trillion →