Elon Musk is either a modern-day Thomas Edison, P.T. Barnum — or somewhere in between.

The world’s richest man kicked off his fortune by co-founding the world’s largest fintech company (PayPal). He then created a reusable rocket (SpaceX) and finally, changed the entire automotive market with the world’s first mass-produced EV (Tesla).

Of course, his predictions haven’t always hit their mark. For example, he promised fully autonomous vehicles by the end of 2019.

And now he wants to make Twitter great again. Ever since he bought the company for $44 billion last month, Elon’s been making some very controversial moves.

I covered some of it last week in this video:

But even though the headlines about Twitter just keep piling up, there are a few plot points people are missing in this narrative.

Let’s first untangle the mess of how and why he bought Twitter in the first place. Then I’ll get into five reasons why Elon’s Twitter buy might be bad for business — especially where Tesla is concerned.

To recap: Elon bought Twitter on a whim. It was at the peak of the market cycle, so for perspective, $44 billion was $54.20 per share.

He subsequently tried to back out of the deal, likely realizing he overpaid as the market started sliding.

He then tried to make the case that the company was a lemon — the argument being that Twitter didn’t properly disclose the number of bots that were posing as real people, thereby inflating daily active user metrics. 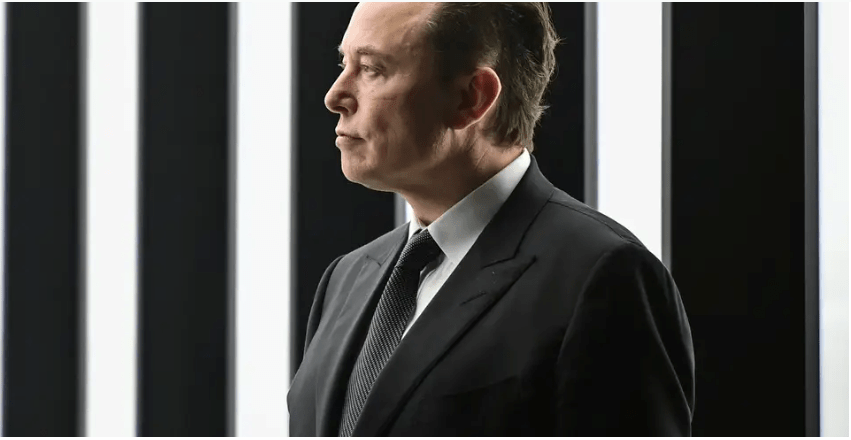 Instead of going through a long, drawn-out court battle (which he had very little chance of winning), Elon eventually caved. He agreed to follow through with his Twitter acquisition.

But perhaps Elon’s motivation isn’t for monetary gain. By some estimates, he’s already down on his investment, given the fall in Twitter’s competitors — like Meta Platforms (Facebook) and Snapchat — in relation to the price he paid. 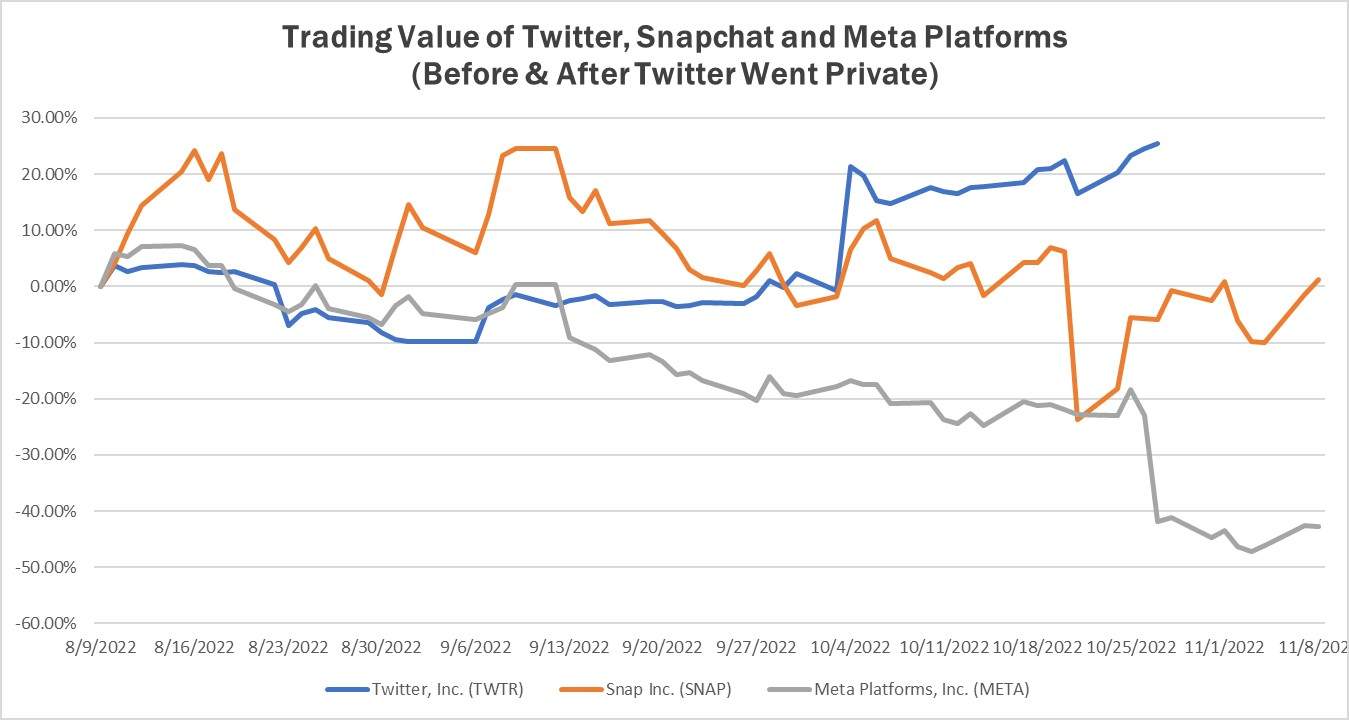 Twitter became private and stopped being publicly traded on October 27. By that point, its shares were up about 20%. Meanwhile, Snapchat and Meta Platforms are still trading. But they’re now down around 20% and 60% respectively, compared to when Twitter stopped trading.

The data suggests that if Twitter hadn’t gone private, it would still be trading in line with its competitors — down as much as 60%.

But here’s what happened next. On the eve of the deal closing, he tweeted out a note to his advertisers. 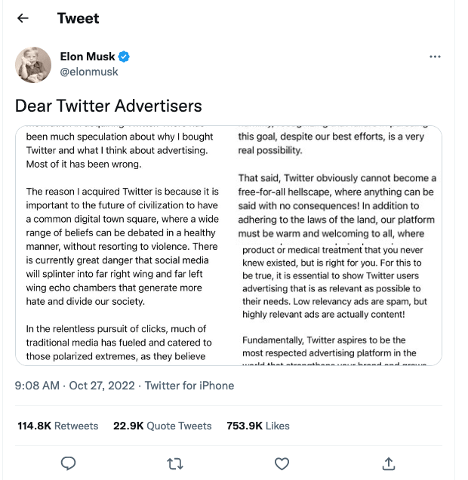 In it he revealed: “The reason I acquired Twitter is because it is important to the future of civilization to have a common digital town square, where a wide range of beliefs can be debated in a healthy manner, without resorting to violence.”

And on Day 1, Elon walked into the office carrying a sink. He tweeted out: “Walking into Twitter HQ — let that sink in.”

So that’s why he followed through with the Twitter purchase. He has a lot of plans for the company (which we’ll get into).

But there’s also a chance he could sink the company. Here are five ways Elon’s Twitter buy might backfire. 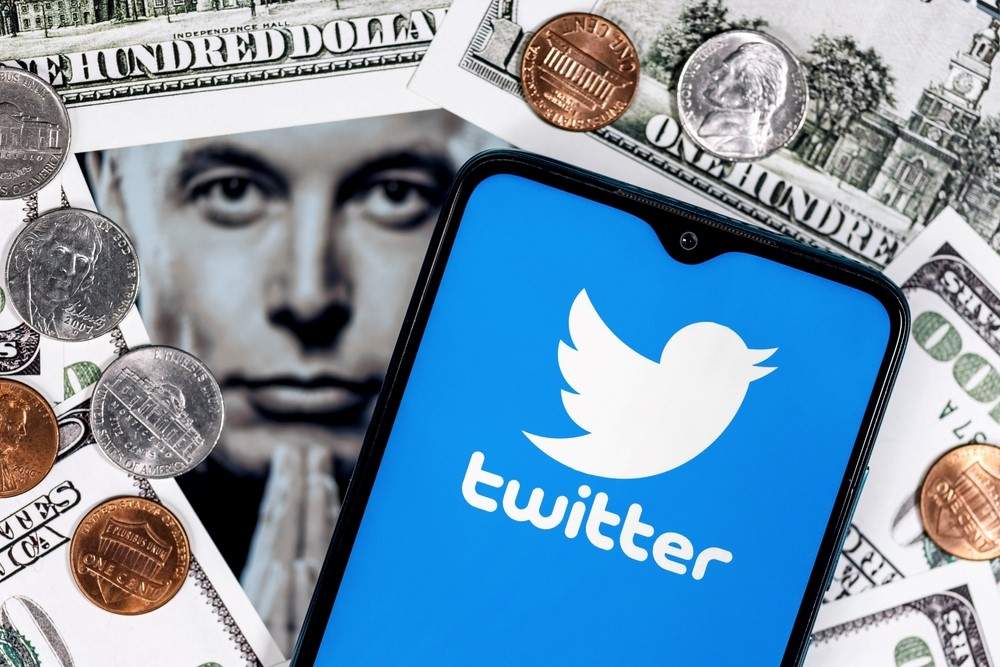 The popular social media platform, which boasts 345.3 million monthly active users, hasn’t quite kept up with its peers as far as revenue.

The company generated only $5 billion in 2021. That pales in comparison to Facebook’s $117 billion and YouTube’s $28 billion in the same year.

This is a problem Elon’s trying to address. But how he wants to make Twitter more profitable is making some people uncomfortable, and many others are losing their jobs.

Elon has actually accused Agrawal of left-wing bias in the past, using Twitter as a platform to do so.

And within a week (November 4), half the company received pink slips. Well, really they were notified via email.

The remaining employees will also be coming back to the office, as Elon reversed Twitter’s work-from-home policy.

A few days later, he tried to bring back some of the engineers that had been dismissed, realizing there were several key initiatives they were working on.

But this move is not the end for Elon’s controversial Twitter initiatives.

Elon promised to bring back accounts that were suspended for spreading political or vaccine misinformation.

He also tweeted a story that made baseless allegations about Nancy Pelosi’s husband, who was attacked in his home. (He later deleted the tweet.)

Ninety percent of Twitter’s revenue comes from advertising. And so far, advertisers don’t like what they see.

General Motors, Pfizer and Audi were among the first to go. Though to be fair, GM and Audi are Tesla’s competitors, so they probably didn’t want to help Elon in the first place.

Others have expressed frustration with Musk’s focus on product development as a solution for hate speech rather than policy.

General Mills also said it will pause ads, saying it will “continue to monitor this new direction and evaluate our marketing spend.”

Musk responded by tweeting out: “Twitter has had a massive drop in revenue, due to activist groups pressuring advertisers, even though nothing has changed with content moderation and we did everything we could to appease the activists.”

So now he’s looking to raise revenue from other sources.

This week, Twitter unveiled a new subscription service that will allow users to receive a blue check mark on their profiles.

Previously, receiving a blue check required an arduous verification process. (Or it required knowing someone at the company.)

For $7.99 a month, Musk views verification as a way to fight spam on the platform. He thinks introducing a fee on blue check marks will raise the cost of producing spam and misinformation.

I personally doubt misinformation actors like Russian and China will be deterred by a $7.99 monthly payment.

By some estimates, Musk will need 10 million subscribers to Twitter Blue just to cover the debt servicing costs from buying the company.

There’s an even bigger risk to Tesla. 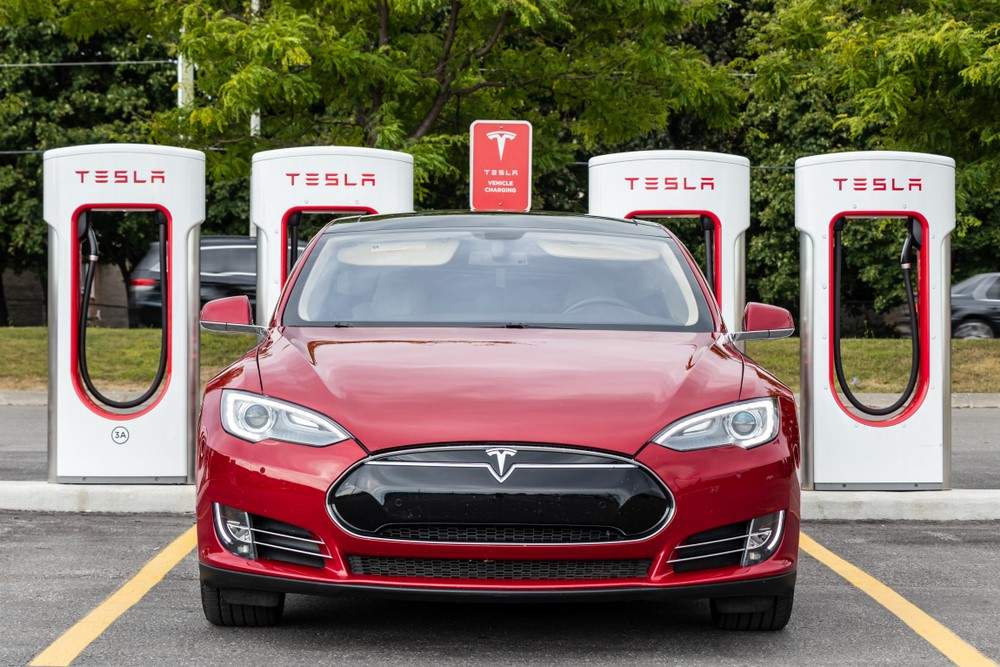 GM and Ford spent more than $6 billion on marketing in 2021 combined. That’s about 25% of their $24 billion operating profits.

You don’t see Tesla ads on Facebook or even during Sunday football.

He’s a Tony Stark-like character that seems to always be in the media. As a result, the brand has become a status symbol among wealthy, climate-conscious motorists.

This is one reason Tesla commands higher gross margins than the rest of the industry. It also helps explain why the stock is valued 5X more than General Motors and Ford combined.

There is a chance that Elon can turn Twitter around. Under his leadership, the platform could be a place that fosters open dialogue and discussion without devolving into a “digital hellscape.”

But it might involve alienating some of his Tesla customers who don’t agree with his changes to the platform.

The good news is … Twitter’s current state can’t get much worse. But I’m no less intrigued by what innovation Elon might bring to the table. It could further move the needle toward Edison, and away from a modern-day carnival barker.

So what do you think?

Will Elon Musk’s Twitter buy sink his battleship, or will he be what the social media platform needs? How will all this impact Tesla (and his other businesses)?

Ironically enough, you can reach me on Twitter: @InvestWithIan! Or just send me an email at WinningInvestorDaily@BanyanHill.com.

If you liked this article and want to get notified on new posts, subscribe to Winning Investor Daily!