I’ve got a confession to make…

I wasn’t exactly an “early adopter” of Apple’s first iPhone.

Back in 2007, I was still glued to my trusty BlackBerry.

But back then, they were a status symbol, a must-have for anyone working in finance. 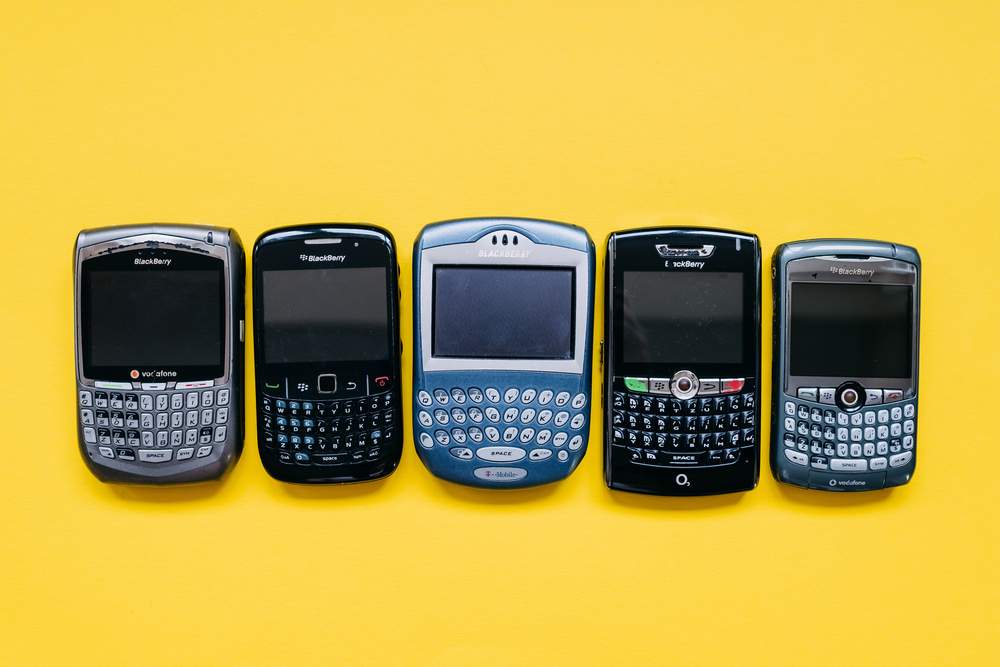 Plus, I was hooked on that Brickbreaker mobile game.

I only switched to Apple after that Blackberry crashed, ruining my high score.

That’s nearly half of all American smartphones.

Of course, once you own an iPhone, the AirPods are a must-have.

After that, your first Apple watch probably isn’t far off. Maybe even an iPad or MacBook too.

Apple has a whole ecosystem of products to draw you in.

That’s why it dominates tech like no other company in history.

To put its dominance in perspective…

Consider that there are currently 1.8 billion active Apple devices, including iPhones, Apple watches, tablets and more.

Apple’s success is so massive and unique that it’s hard to quantify.

Even when you break things down, it still beggars belief…

For example, here’s a chart comparing revenue of a single Apple product (AirPods) to some of the market’s biggest tech breakouts: 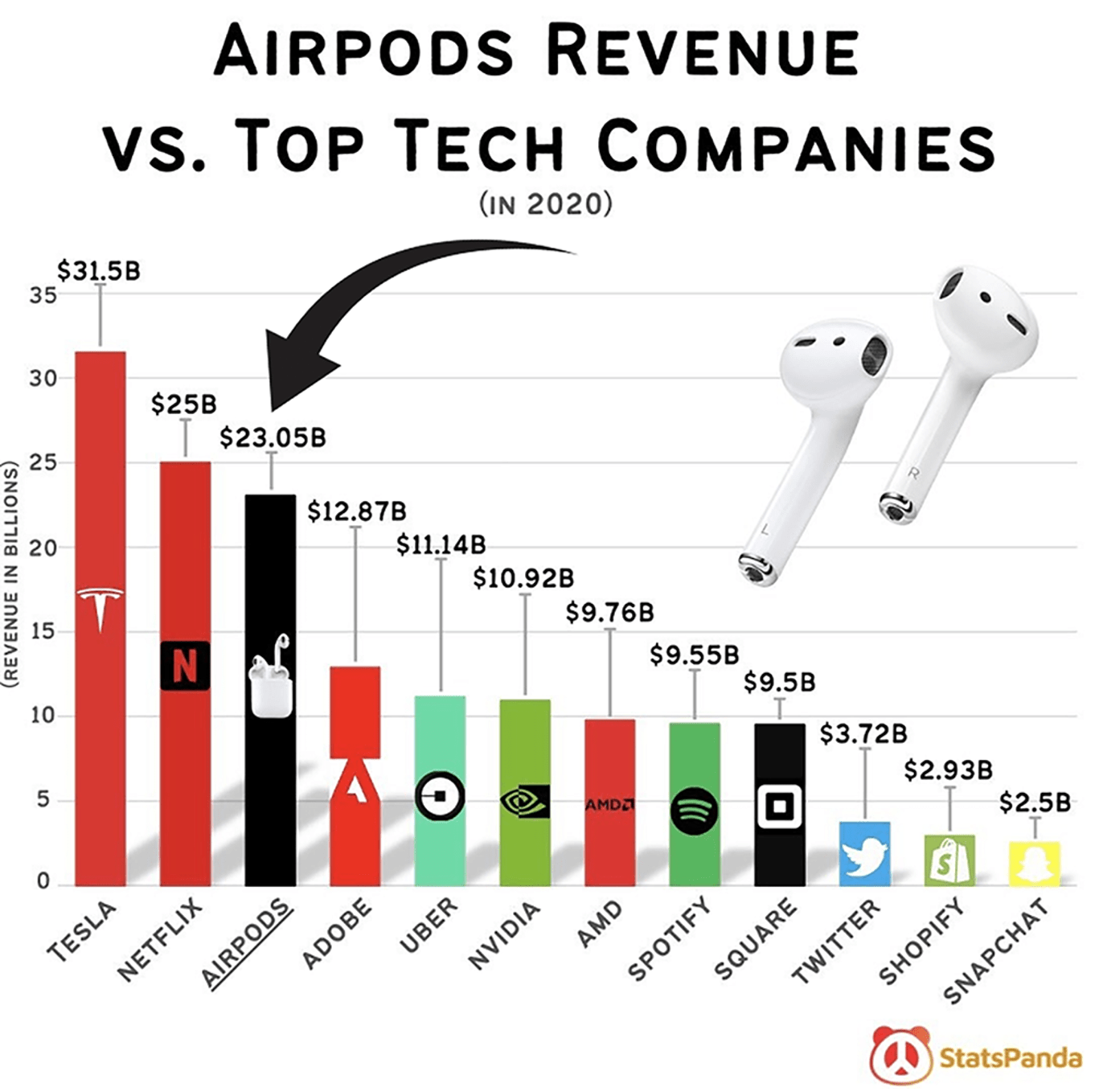 As you can see, Apple’s wireless headphones alone earned almost as much as Netflix.

They were worth more than Nvidia and AMD combined.

Twice as much as Uber!

We’re only talking about AirPods here too.

These little white headphones accounted for $23 billion in revenue. That’s less than 10% of the company’s total annual revenue of $274 billion.

The same success story comes with almost every Apple product.

From the original Macintosh to those old iPods, from today’s smartwatches to wireless headphones…

The company has turned disruptive technology into a reliable business model.

And now Apple is set to announce its most disruptive new product yet.

This whole story started with a discussion between Steve Jobs and his top executives back in 2008.

But it wasn’t until 2015 that things began in earnest.

Outside the company, it’s one of the most sought-after secrets in all of Silicon Valley.

Bloomberg says it’s “beloved before [CEO] Tim Cook has one to sell.”

Tesla owner Elon Musk calls it an “open secret.” He told the BBC: “It’s pretty hard to hide something if you hire over 1,000 engineers to do it.”

One engineer even admitted to stealing trade secrets from the project … then selling them to a Chinese competitor.

So even though Apple has tried to keep Titan a secret, there are still plenty of details online.

First, there were the strange, unmarked vehicles spotted near the company’s California headquarters: 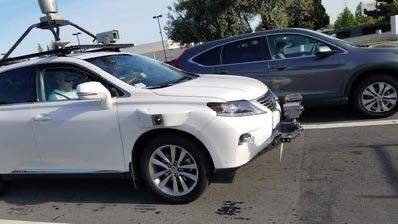 More than 60 of these camera-equipped test vehicles were eventually spotted on the roads around Cupertino.

Then the news broke that Apple was poaching hundreds of top tech players from companies like Samsung … A123 batteries … and Tesla.

Finally, there were the patents. Apple has applied for 248 auto-related patents since 2000.

If all this makes you think Apple might be working on a car — then you’re not alone.

The idea might sound far-fetched at first. But it makes complete sense.

As former Apple VP Anthony Fadell told Steve Jobs in those first discussions: “A car has batteries. It has a computer. It has a motor, and it has mechanical structure. If you look at the iPhone, it has all the same things.”

And Fadell was right.

The average car rolls off the line with 1,000 computer chips under the hood.

Electric vehicles (EVs) need twice as many to manage their power systems. Fully loaded with self-driving features, that EV might need up to 3,000.

Apple has a knack for making that kind of complex technology reliable, appealing and easy to use.

Jobs liked the idea but chose not to pursue the project because the timing wasn’t right.

That was back in 2008, when the industry was in shambles. The country’s biggest automakers were begging for bailouts.

But the EV boom opened new doors for Apple — bringing the idea back to life as Project Titan under new CEO Tim Cook.

At the moment, the company is on track for a 2025 release date.

Though we could possibly see a sneak peek as soon as this year.

So what will Apple be unveiling?

The details of the Apple Car are still sketchy and mostly based on rumors.

We have a few creative artist renderings (including my favorite above). But the public still hasn’t seen any official designs.

It’s expected to be an EV, and it may or may not use the Combined Charging System (CCS) already used by BMW, Tesla, Ford and other automakers.

Apple analyst Ming-Chi Kuo expects the car will be a “very high-end” model.

It will likely compete with luxury vehicles and high-end EVs.

According to Bloomberg, Apple’s team has also discussed building a car without a steering wheel or pedals.

CEO Tim Cook confirmed that self-driving tech was a priority back in 2017:

“We’re focusing on [a] autonomous system. It’s a core technology we view as very important.”

That was five years ago though.

Big tech projects often evolve and transform over time — especially something this ambitious.

But one thing is certain:

When the Apple Car is finally released, it will instantly become the world’s most-wanted car.

Strategic Fortunes subscribers know I believe all new cars will be electric by the end of the decade.

And I think an Apple EV could help take us there faster than you might realize.

Apple’s Recipe for Instant Mass Adoption of Its EVs

A recent survey of over 200,000 drivers found that 26% would “definitely consider” purchasing an Apple Car.

For EV drivers, the number was even higher.

Half of all Tesla owners said they’d consider changing over. 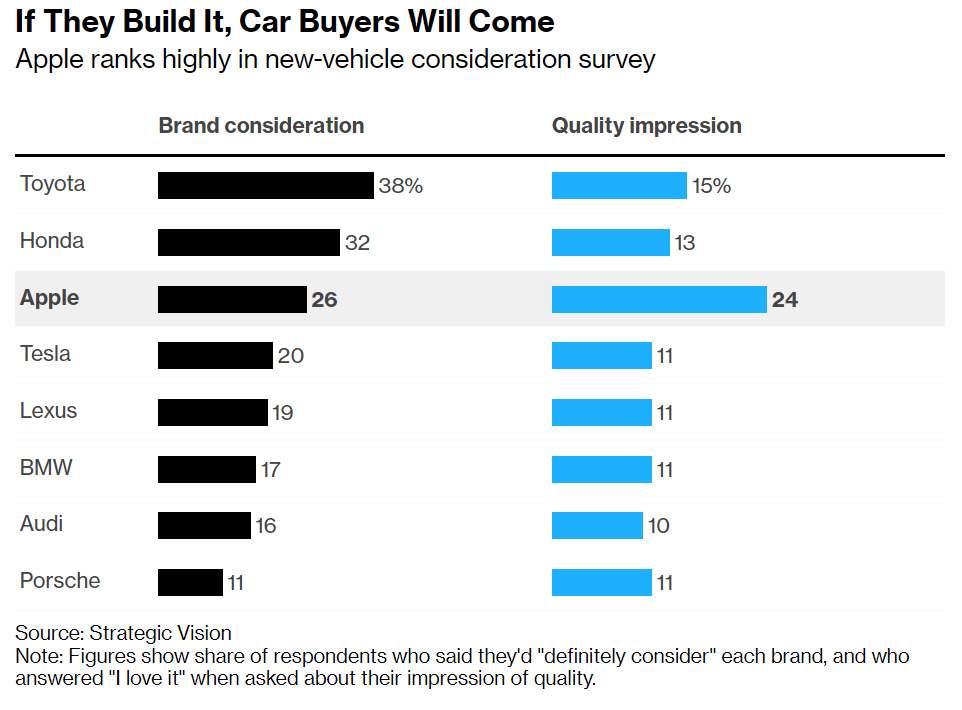 In other words, Apple Cars are already more popular than Teslas.

Even though they don’t even exist yet.

My friend and colleague Amber Lancaster is one of those potential buyers.

She said she’d happily switch over to an Apple Car because “that’s how much Apple CarPlay means to me.”

Like I said — Apple has the kind of following most companies can only dream of.

And its reputation is well earned.

After all, Apple is more than just a technology company.

Back in 1984, Apple revolutionized home computing with the Macintosh. It was the first time many Americans ever saw a computer mouse.

Then in 2001, the new iPod let you “put 1,000 songs in your pocket.” It was easy to use, rechargeable and Apple ended up selling over 50 million iPods every year. 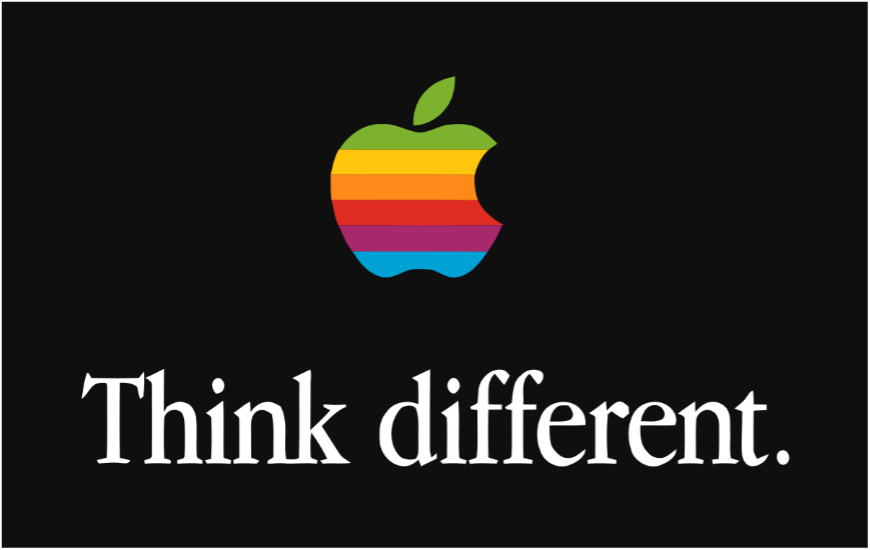 But like so many previous Apple successes, the iPhone was the first to break through and go mainstream.

Now it dominates a whole industry.

That’s the secret to Apple’s success as a disruptor.

The company isn’t rushing products to market just to be the first on the shelf.

It’s painstakingly creating devices that consumer absolutely must have.

To use Apple’s own motto, its engineers always “think different” to create something totally new.

I think Henry Ford once said, ‘If I’d ask customers what they wanted, they would’ve told me a faster horse.’ People don’t know what they want until you show it to them … our task is to read things that are not yet on the page.

And it’s why investors could soon… 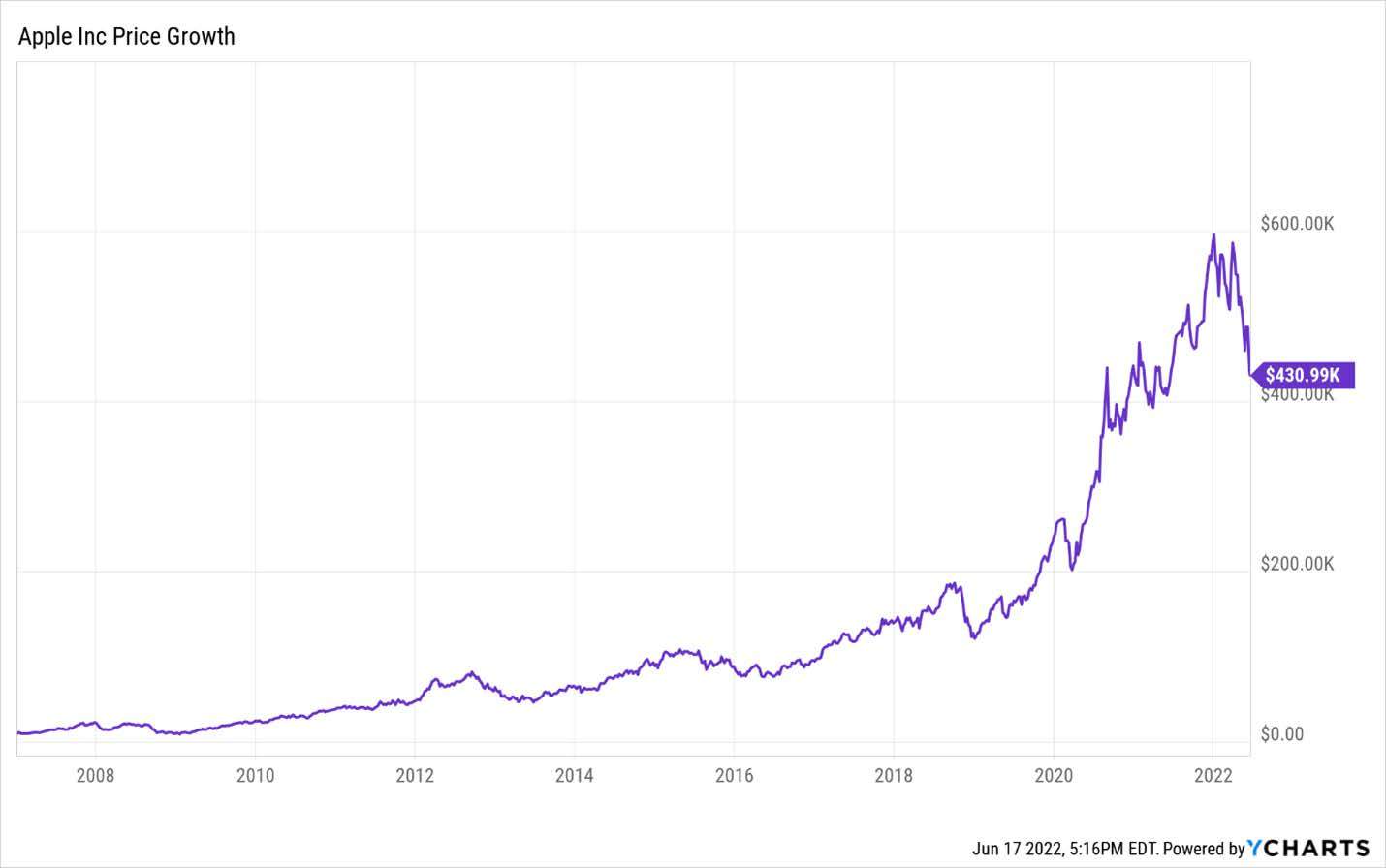 Now, I’m not saying Apple shares will repeat those kinds of gains.

At the same time, we are talking about disrupting a much larger market.

The global market for smartphones is still less than $400 billion.

And the automotive market is worth nearly $3 trillion. That’s more than seven times the size.

It might be hard to imagine Apple breaking through to dominate a whole new industry.

Back when the iPhone first came out, former Microsoft CEO Steve Ballmer said: “There’s no chance that the iPhone is going to get any significant market share. No chance.”

Today, the iPhone accounts for roughly half of all American smartphones.

Wired magazine famously said the iPad was “little more than a giant iPhone.”

And in May of this year, AutoBlog featured an opinion piece called “Why Apple should not build an iCar.”

But with the company’s track record, it hardly makes sense to bet against it.

So how can investors cash in on the situation?

That means shares aren’t exactly cheap, even after this year’s decline.

Instead of going directly for Apple stock, the best opportunities will be found “under the hood” (assuming the Apple Car has a hood, that is).

I’m talking about the microchips, batteries and subsystems that will make the Apple Car run.

Many of these components will be sourced from smaller companies, leading to explosive earnings potential.

Just take a look at how a few smaller tech companies fared after teaming up with Apple.

Here’s a chart that shows how much you would’ve made after investing just $10,000 in each of these companies: 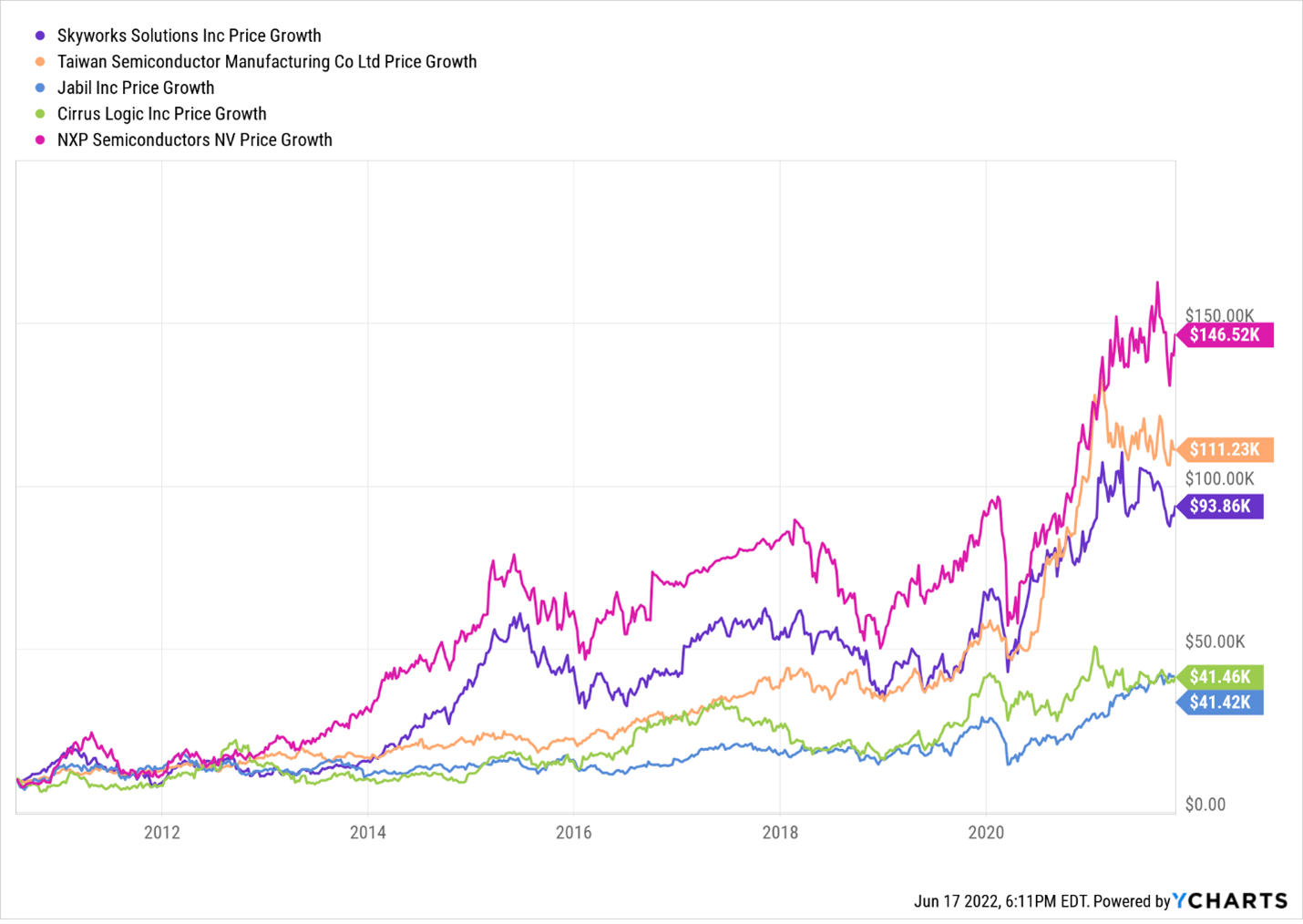 Best of all, these stocks let you start cashing in on the EV boom immediately.

You won’t have to wait for Apple to release a car … or deliver the next breakthrough in self-driving technology.

But when that happens…

Would You Buy an Apple Car?

If Apple announces a new EV later this year — would you want it if the price was right?

Why or why not?

Email me your thoughts at WinningInvestorDaily@BanyanHill.com.

And if you’d like to know more about the EV industry, just click here. I reveal my #1 EV stock pick for 2022!

I’m really looking forward to hearing what you think of the Apple Car.

You can look forward to my response in this Saturday’s edition of RAD!

← How to Beat Inflation With 2.0 TechWhy Ethereum Could Replace the U.S. Dollar →