I looked out over the skyline from the rooftop lounge of the Park Hyatt Beijing.

The bartender was right.

The city wasn’t overcast — it was enveloped in smog.

It’s the first thing that comes to mind when I remember my visit to China in 2007.

GDP was growing seven times faster than ours here in the United States.

And new cities the size of Houston were being built every month.

But even with all of its economic growth, China had a major problem.

It was so bad that health experts estimated smog was taking 2.6 years off locals’ life expectancies.

Dense, toxic smog reduced visibility in the city center to just 200 meters. It wreaked havoc on traffic and even Beijing’s airport.

The Olympics arrived in Beijing a year after my visit. The International Olympic Committee warned athletes about exposure to heat, humidity and — more importantly — pollution.

The world’s top marathon runner dropped out due to health concerns.

The whole situation was a serious black eye for the People’s Republic of China.

So in 2013, the government took decisive action, committing to a new clean air policy…

Spending $60 billion on battery technology and building electric vehicle (EV) charging stations all over the country.

And this is where the Oracle of Omaha comes in.

Warren Buffett was looking into one of China’s up-and-coming EV titans, a company called BYD.

Buffett invested $232 million, and the financial media was aghast.

His investment made the cover of Fortune magazine: 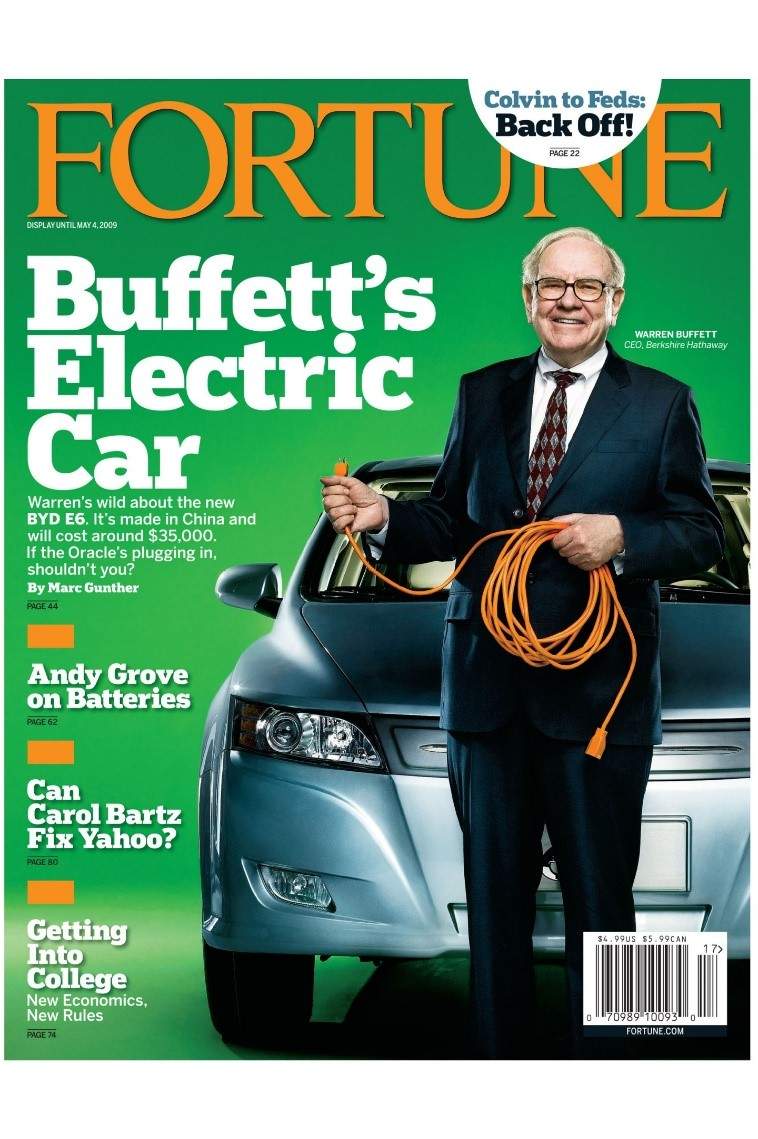 But his right hand man, Charlie Munger, pushed him toward it.

This guy is a combination of Thomas Edison and Jack Welch — something like Edison in solving technical problems and something like Welch in getting done what he needs to do. I have never seen anything like it.

One glance at the chart of China’s EV market and you’ll know that Buffett’s investment was a big home run: 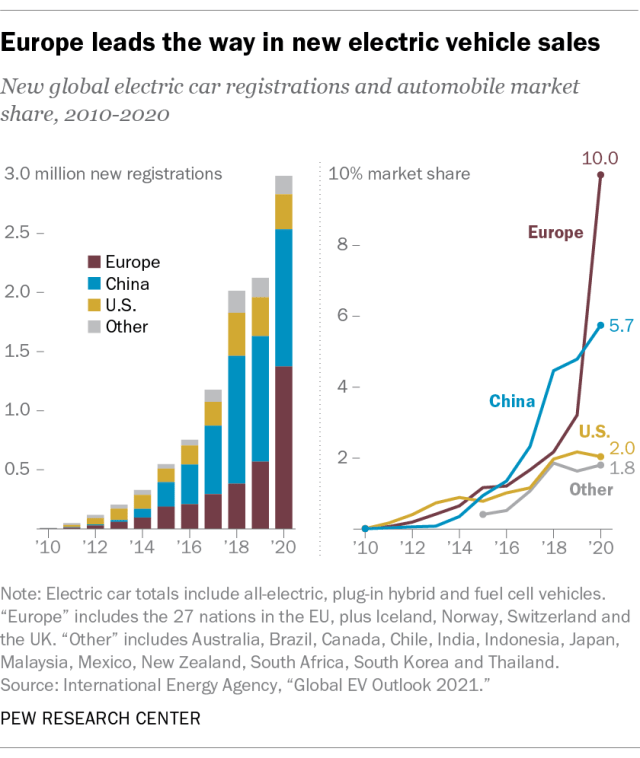 Today, Chinese buyers purchase nearly three times as many EVs as Americans. And BYD is their EV brand of choice. Yes, it outsells Tesla.

As for Buffett, his $232 million stake has skyrocketed to a $7.7 billion windfall. 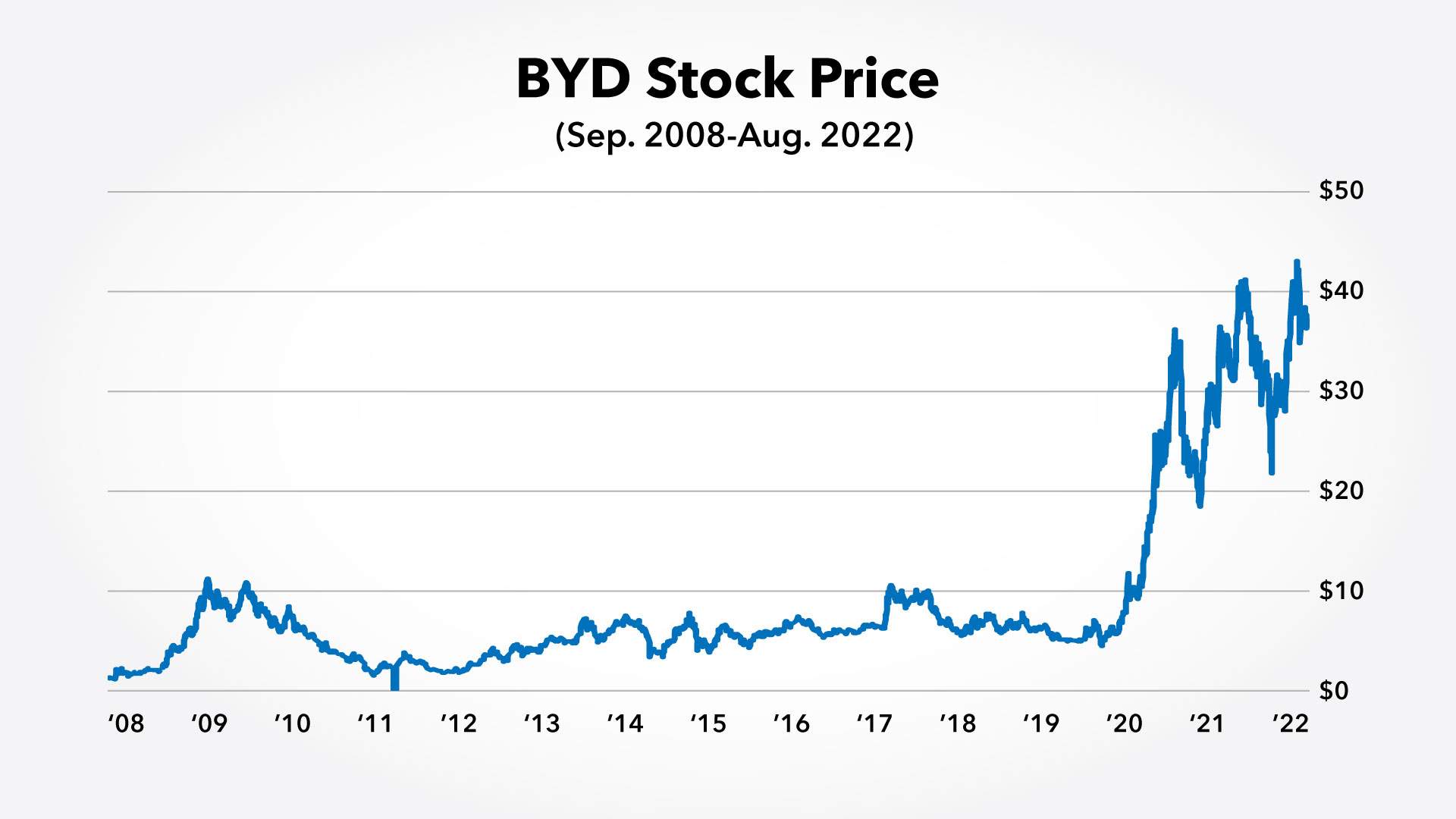 Your Next Car Will Be an EV

I’m an early adopter. Whether it’s the latest iPhone, a new fitness tracker or a smart home device, I’m there.

When it comes to EVs, I’m the same way.

Last year, I made the leap and bought a hybrid Jeep.

And let me tell you, it’s fun to drive. I step on the pedal, and it just goes.

Even better? It gets 25 miles per charge. All I have to do is plug it in each night.

Over the last year, I’ve filled up the gas tank only five times. It’s great.

And there’s a good chance you’ll be joining me when you buy your next car.

Already, 2.32 million Americans have already made the switch.

According to a recent study from Car Industry Analysis, Tesla’s Model 3 was the ninth highest-selling vehicle in the world. It’s on track to overtake Ford’s F-150 very soon: 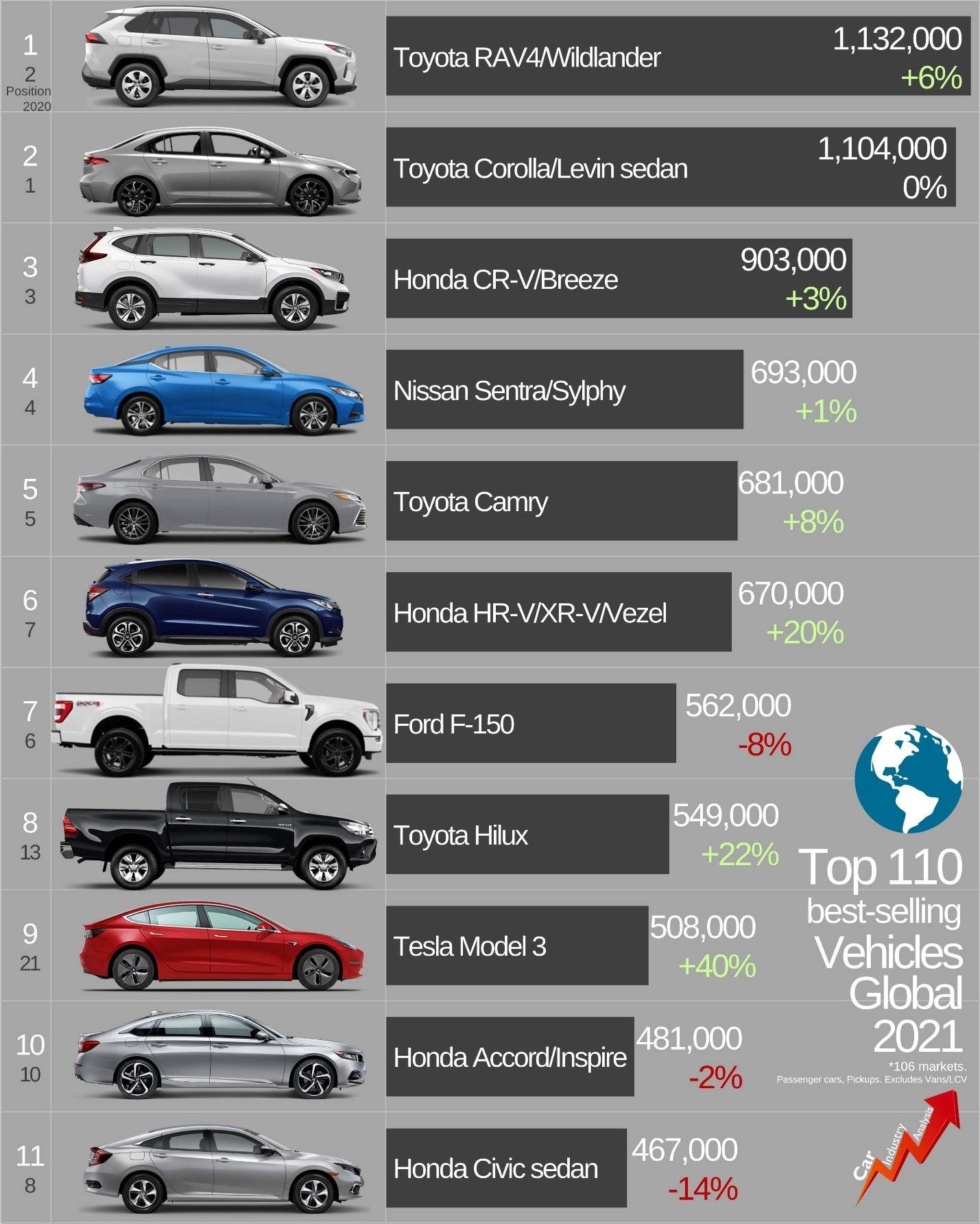 It’s not hard to believe either.

If your neighborhood is like mine, every few driveways there’s a Tesla.

American EVs are selling the minute dealerships get them on the lot.

Ford sold 15,300 EVs between April and June alone. According to Ford’s CFO John Lawler: “The transformation is real … electric vehicle demand is well beyond what we can supply.”

And while Tesla still controls 75% of the American EV market, other manufacturers are starting to catch up.

Every company from Bentley and BMW to GM, Jaguar and Volkswagen is slated to launch new EVs soon. Chevy’s working on a new Corvette rumored to have upward of 1,000 horsepower.

EVs are even the fastest-selling used cars in America.

A study from iSeeCars revealed the average used Tesla Model 3 only sits on the lot for just 15 days before a buyer snatches it up.

Meanwhile, the average used car takes more than twice as long to sell.

Yet there’s one last major obstacle in the way of mass EV adoption.

According to a recent poll, the No. 1 reason American car buyers are not purchasing EVs is — range.

And there aren’t enough charging stations.

Currently, there are only 46,000 in the United States.

That’s simply not enough for mass adoption, with over 276 million cars on the road.

That means the average distance between charging stations in America is 70 miles. Not bad, but it still means having to plan longer trips around your refueling stops. 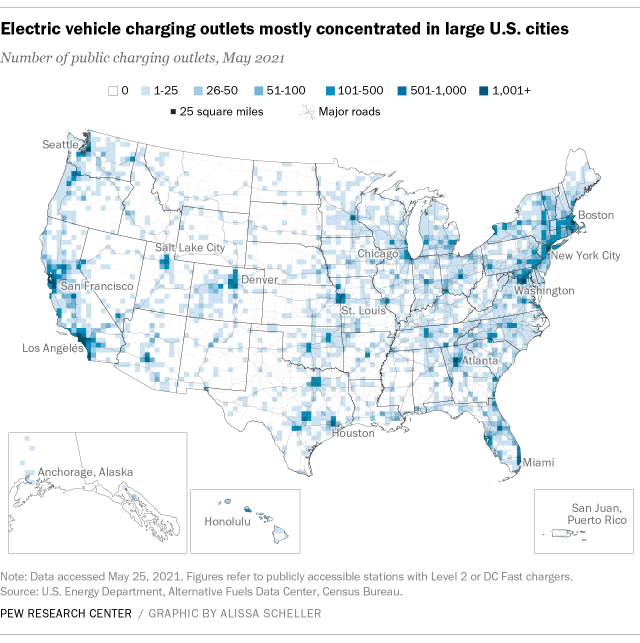 Meanwhile in China, the average distance between charging stations is less than half that.

But that’s all about to change…

Building this infrastructure has been one of the biggest challenges for America’s EV industry.

It’s the reason hybrid cars like the Prius have stayed so popular for so long.

But the U.S. government is finally stepping in to make things happen…

In July of this year, Congress allocated $50 billion to boost U.S. chip manufacturing.

And in February, Biden’s administration pledged $5 billion to build out EV charging infrastructure across the country.

The new charging stations will be built along alternative fuel corridors near interstate highways. These locations are already high-traffic, so it’s ideal.

In a recent address to the press, he said:

Right now, China is leading the race. It’s one of the largest and fastest-growing electric vehicle markets. The rest of the world is moving ahead — we’ve just got to step up.

It’s the same kind of tone and resolve that ushered in China’s massive EV boom.

Except this is America…

And experts believe America’s EV boom could be worth $823 billion.

That might sound small. But it’s a huge milestone.

Because that 5% level is a crucial threshold. It’s where a new technology’s early adopters are overtaken by mainstream demand.

When early curiosity gives way to a tidal wave of demand.

We’ve seen it happen with every new major technology of the last century — from cellphones to the internet to television and automobiles. They always start small, then they catch on and grow like wildfire.

In 1910, only 2% of American families owned an automobile.

Fast-forward 17 years, and 77% of Americans were car buyers.

The internet saw the same explosive growth once it crossed that 5% threshold.

Back when everyone was panicking over Y2K, only about 5% of the world used the internet. Just 10 years later, 1.2 billion people were on the web every day. Today, there are 5.38 billion users.

The pattern makes sense too…

New technology is often cumbersome and expensive in its early years.

Remember those giant, old cellphones that looked like you were talking into a brick?

Back in 2010, when Tesla was selling its first-generation Roadster, EV batteries were massive. They cost about $35,000 each and had a range of about 80 miles.

Since then, battery technology has improved by leaps and bounds.

Prices are down, and capacity is way up: 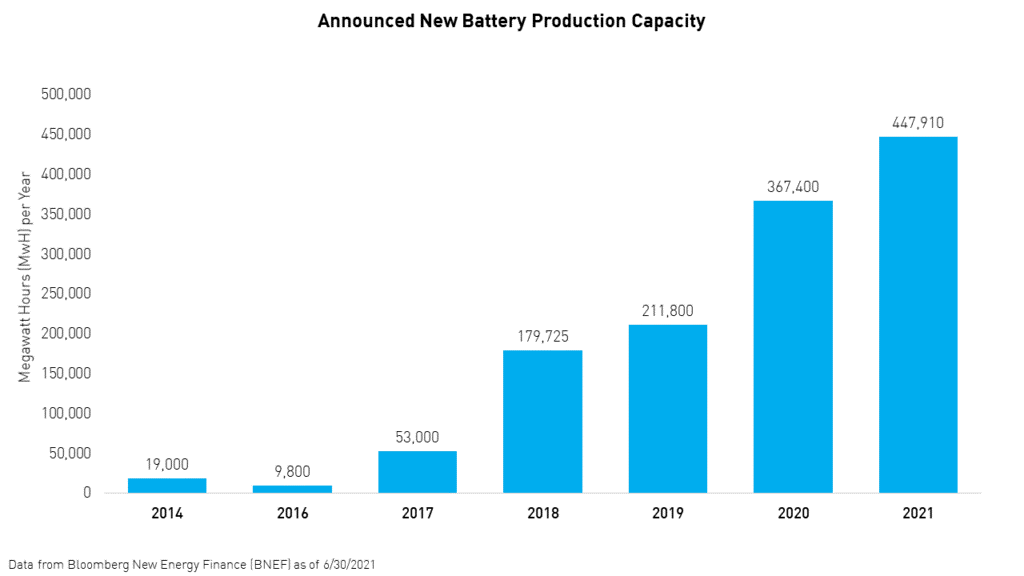 Just as important as an EV’s battery is its processing power.

Today’s average gas-powered car rolls off the assembly line with 1,000 different processors under the hood.

But an EV needs twice as many chips to run all its onboard sensors and systems.

A fully loaded EV with self-driving features may even have as many as 3,000 chips on board.

And despite short-term trouble due to chip shortages, the long-term trend here is the same — you’re paying less for more power.

All of these advantages and innovations add up: 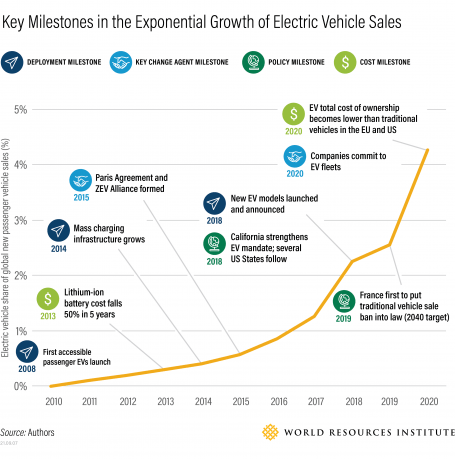 EVs have been limited to the luxury crowd for years. Now they’re becoming a practical choice for average drivers.

It’s already cheaper to own an EV than a traditional gas-powered car.

And they’re only getting cheaper as gas prices rise.

That’s why experts believe the number of EVs on the road will balloon over the next few years from 12 million to 54 million.

Frankly, I think most of these estimates are too low if you consider the momentum of EV sales.

All the net growth in global car sales last year came from EVs. By the end of the decade, I think EVs could make up as much as 90% of all new cars sold.

It’s easy to look at all this and think investing in EV manufacturers must be a great play right now.

It’s not quite that simple though.

Back in the early days of the automobile, there were 50 different manufacturers in America. Now we’re down to just three.

That same cycle is happening with EVs.

There are 40 different companies with plans to roll out new vehicles over the next few years.

How many of these new manufacturers will make it in the long term?

Not many, in my opinion.

You might look toward dominant players like Tesla in the U.S. or BYD in China. But these companies have already seen some of their biggest gains. (That’s why I told my readers to sell Tesla, after making a 735% gain in just over one year.)

There’s no stopping the EV industry — it’s the future of cars.

And I’ve found a great company that supplies nearly every American EV manufacturer with a critical component.

For details on this company, just go here.

← Why Biotech Will Have a $3 Trillion ImpactNEW VIDEO: Your Crypto Questions Answered →