We were promised flying cars. Instead, we got Facebook.

It’s not that Facebook doesn’t have any utility. I’m thrilled that I can keep in touch with distant relatives and second grade classmates.

It’s just that the utopian future we’ve always envisioned has yet to arrive.

Sure, we’ve got smartphones and smartwatches that allow us to communicate with anyone, anywhere. We can also store tons of photos of our kids and pets.

We also have smart TVs that let us stream our favorite shows and movies on demand.

And there are smart coffee machines that will automatically order you another bag of Costa Rican dark roast before you run out.

There are even plant-based meat substitutes that allow vegans to enjoy a juicy cheeseburger — provided the cheese is made from almond milk.

But these new technologies haven’t yet led to widespread prosperity in the economic sense of the word.

That’s about to change.

Right now, all the disruptive trends that you’ve been reading about in Smart Profits Daily are converging.

And this will usher in a massive wave of productivity.

We’re Working More Than Ever

Keynes got a lot of things right. But unfortunately for all of us, this one was way off.

(Perhaps Keynes was right about his grandkids. After all, his magnum opus, The General Theory of Employment, Interest and Money, still collects royalties for his estate.)

In Keynes’ time, the impact of the Industrial Revolution led to a sharp decline in average weekly hours worked.

New machinery powered by technologies such as electricity and the internal combustion engine allowed workers to produce more with less human input.

Keynes expected this trend to continue with the rise of new technologies. However, the last 50-plus years have bucked that trend.

The steady decline of weekly hours worked flatlined during the Great Depression and then slowly rose over the past few decades.

One of the reasons for the long workweek is that despite all of our recent technological innovations, productivity hasn’t rapidly increased.

Productivity is the key measure of economic success. It measures how much output society can get from a given input.

It determines the average standard of living and makes the difference between advanced and developing countries.

A reasonable person would expect that the past decade’s developments around automation and the internet would lead to a more productive workforce.

But that’s not the case.

We’re About to Hit a Tipping Point

In the past 100 years, there was only one big wave of productivity (as measured in total factor productivity) that occurred in the first half of the 20th century.

There was also a little bump in the 1990s, but that tapered off as quickly as it arrived: 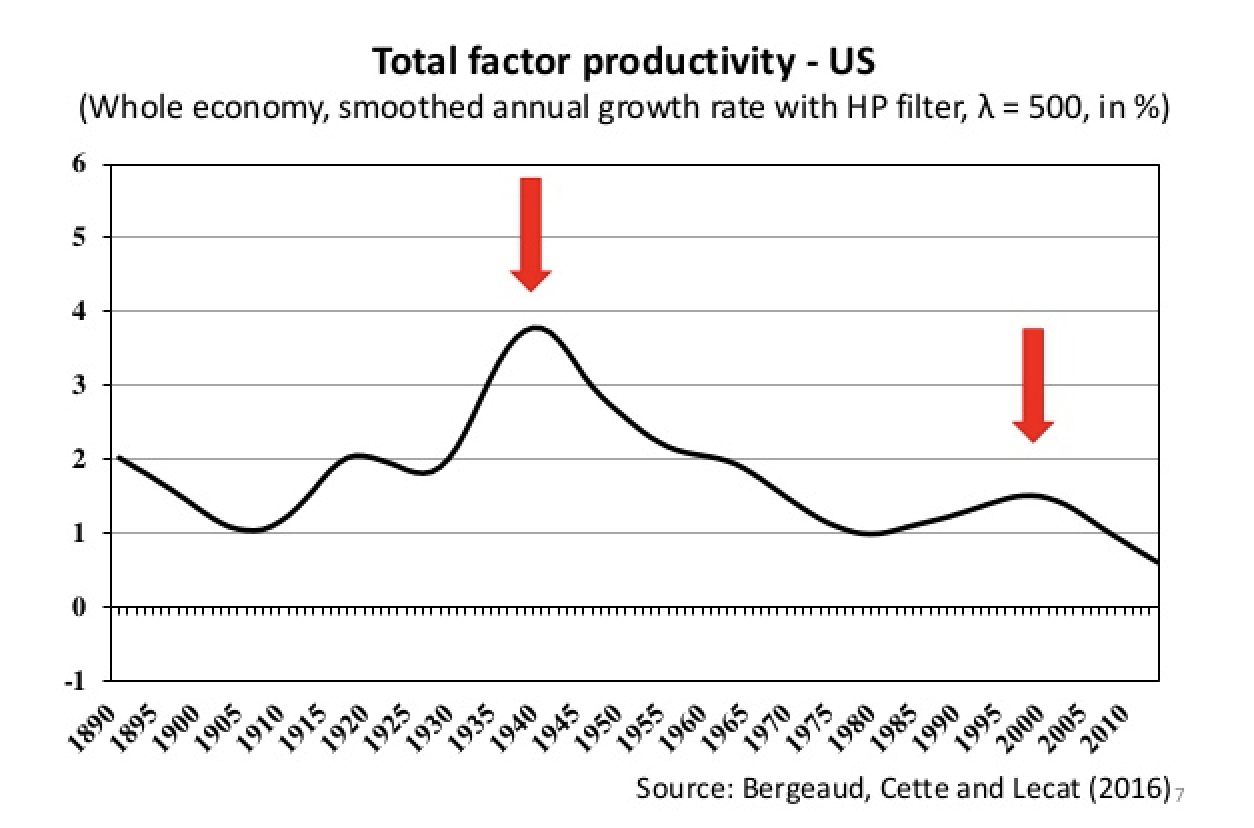 It took a few decades for the breakthroughs of the Industrial Revolution to translate into productivity.

The first automobile patent was awarded to Karl Benz in 1886, but it was decades before Henry Ford mass-produced the Model T.

Thomas Edison produced the first lightbulb in 1879, yet 50 years later only half the homes in the United States had electricity.

Developments such as the automobile and the lightbulb started slowly at first, but then suddenly became part of everyday life.

This ushered in all kinds of new home appliances, such as the dishwasher and washing machine, that largely freed us from the toils of home labor.

And like the productivity surge that followed the Industrial Revolution, we are about to hit the information age’s tipping point.

Because the internet has followed a similar trajectory as electricity.

It’s been around for three decades. However, for most of its lifespan, the internet has only been used to search a giant database called the web.

Get Ready for the Roaring 2020s

Within the next five years, nearly everyone on planet Earth will have internet access, putting the world’s information in the palms of their hands.

Billions of devices will collect and transmit the world’s information over high-speed 5G networks, launching new disruptive trends into the 21st century.

Blockchains will create new financial networks, as users can exchange digital goods without the need for a middleman.

Self-driving taxis will harness the power of artificial intelligence to shuttle your kids safely to soccer practice.

Factory automation will unleash America’s manufacturing engine, while self-driving trucks will ship these products cheaply around the U.S.

Cities will transform into pedestrian-friendly areas as traffic and parking become things of the past.

The world’s best surgeons will be robots.

It will be like the Roaring ’20s have arrived again — a decade of increased productivity and prosperity.

Only time will tell.

This Thursday, October 29, I’ll be showing investors how to capitalize on the most transformative technologies at the New Era Fortunes Summit.

The webinar starts at 1 p.m. Eastern time and is completely free.