“Alexa, remind me at 3 p.m. that my Smart Profits Daily article is due tomorrow morning.”

During quarantine, I had more conversations with my intelligent devices than with other human beings outside of my household.

I can turn the patio lights on or play Fleetwood Mac’s “Dreams” with my voice.

My security system, robot vacuum, TV, Alexa devices, thermostat and lawn sprinkler are connected to Wi-Fi and can be controlled via an app.

Like many Americans, my home is getting smarter. There are now approximately 1.3 billion connected devices in the U.S.

According to research firm Parks Associates, this number will grow to 2.6 billion by 2025. That comes out to 20 devices per household.

With all of these connected devices coming online in the next few years, the arrival of 5G is where the real cord cutting of broadband begins…

5G is the latest iteration of mobile networks.

Over the last 38 years, we’ve gone from crawling at 1G to flying on the 5G rocket ship: 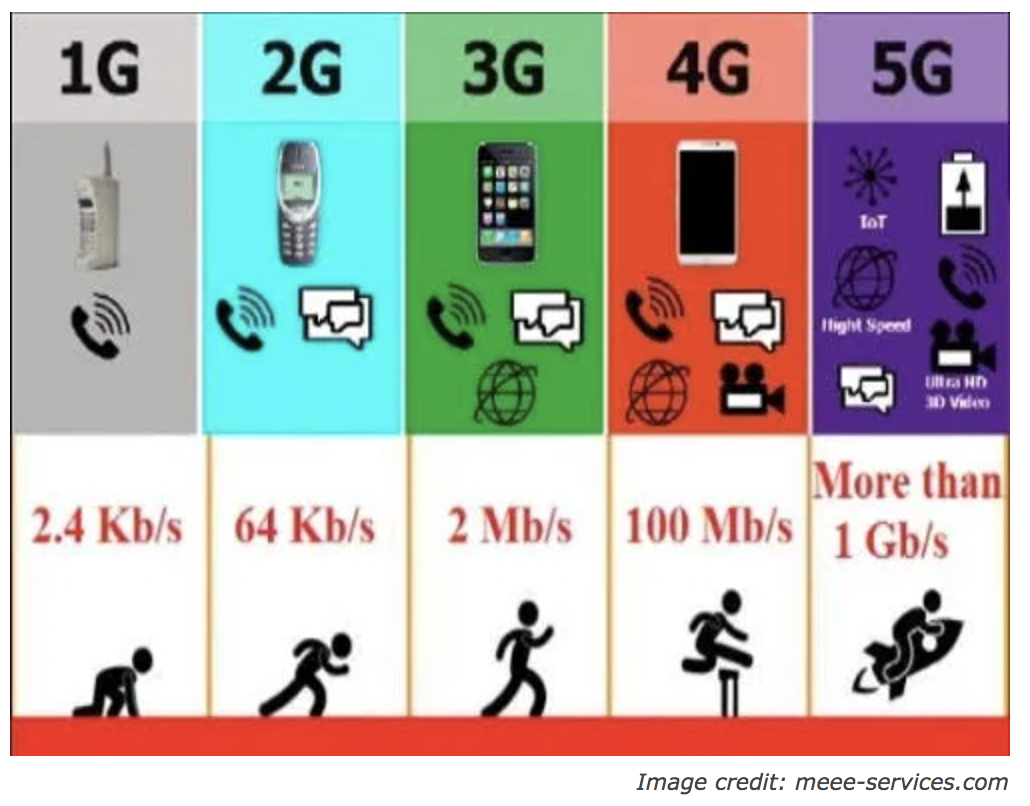 5G provides download speeds of up to 10 gigabits per second (GB/s), which is expected to be 100 times faster than the 4G signal we currently use.

With speeds like that, you could download a two-hour film in just 10 seconds. On a 4G signal, the same task would take five minutes.

But the big breakthrough will be 5G’s zero latency. This means there is no lag time in communications between devices and servers.

Connected cars will be able to communicate with surrounding traffic and roads.

Remote pilots can fly drone deliveries to your home.

Doctors can now perform surgeries from their laptops.

Now, you may not be doing any of these activities from home. But you may want a faster signal for your virtual reality goggles or be able to easily connect to indoor and outdoor video devices.

5G’s most immediate economic impact will come at the expense of home broadband.

Most cable company home broadband plans start at 100 megabits per second (MB/s) — that’s only one one-hundredth of the speed that 5G offers.

That’s why mobile giants AT&T, T-Mobile and Verizon are investing billions in getting their 5G signal straight into customers’ homes.

They’re introducing new types of modems that can pick up 5G’s signal and deliver it to your home’s connected devices.

The telecom giants think they can replace home broadband providers such as Cox, Comcast and Charter. These companies have dominated the home internet market for decades.

The Plan for 5G Home Internet

However, Verizon recently launched a 5G home internet service as an alternative to traditional broadband.

Currently only available in a small number of cities including Chicago, Houston and Los Angeles, it is slated to expand to more by the end of this year.

On Verizon’s 5G Home service, he said: “This is a total transformative business … It’s a totally different thinking.”

He went on to outline his grander plan of bringing 5G Home to 30 million customers in the next five to seven years.