Heading into the event, Wall Street was buzzing about the potential announcement of new vehicles — a Model 2, an electric boat and even an electric airplane.

In prior events, Musk has never shied away from debuting prototypes of new vehicles that wouldn’t become available for a few years. Neither was he ever ashamed about taking deposits for said preproduction items.

As Musk spoke, I noticed the livestream viewer comments were overwhelmingly obsessed with the minute-by-minute update of the stock price. That’s never a good sign.

For most investors, Battery Day was a complete letdown. None of the rumored future prototypes were revealed.

Musk mentioned that Tesla was working on a $25,000 Model 2. But there was no design or model to dazzle the scores of Robinhood traders who watched the event.

But the lack of new vehicles wasn’t the big story here.

Even though Musk’s battery announcements weren’t received with the typical Tesla event fanfare, another industry that just witnessed accelerating growth from Battery Day.

And you don’t want to overlook it.

One of the best ways to invest is to find a new technology or trend and figure out this development’s impact on another industry.

The breakthrough of smaller and more powerful chips led to a smartphone in everyone’s pocket. That allowed investments in Qualcomm, Apple and Micron to soar over the past decade.

Faster home broadband led to stellar returns in streaming stocks such as Netflix and Roku.

And if you saw the rise of SoulCycle last decade, in which urban dwellers were paying up to $72 for a 45-minute stationary spinning class, you could have predicted that Peloton would be a big winner.

That’s why Tesla’s Battery Day announcement is bigger than the auto industry. It will have far-reaching implications that go beyond the way we get around.

What is important to remember about Tesla is its core mission.

It’s not just trying to make an affordable electric vehicle. Its goal is to accelerate the transition to sustainable energy.

In that regard, Battery Day was a big step in the right direction.

Changes in cell design, cheaper sourcing of materials and better integration into vehicles could lead to a 56% reduction in dollars per kilowatt-hour (kWh) over the next decade: 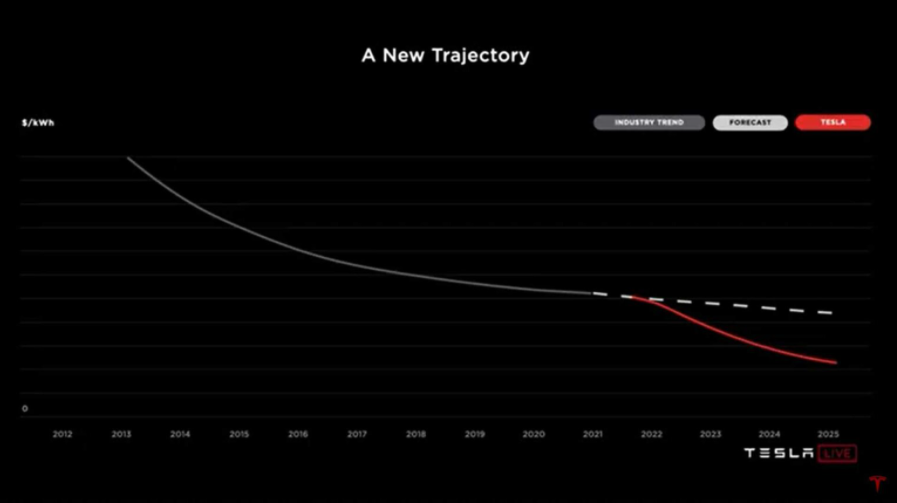 If this comes to fruition, it puts the cost of batteries (and the entire energy industry) on an entirely new course.

Batteries Will Soon Power Our Homes

Automatic Fortunes readers are already familiar with the 90% drop in lithium-ion battery prices (as measured in dollars per kWh) over the past decade. That’s why we recommended scooping up Tesla shares in August 2019.

However, this new trajectory should have far-reaching implications for renewable energy.

We are reaching the point where batteries will not only power our cars, they’ll also store renewable energy in our houses, keeping the lights on and the air conditioning running.

Even before Battery Day, the Solar Energy Industries Association announced a goal for solar power to reach 20% of all U.S. electricity generation by 2030.

That would be more than 10 times its current 1.8% of total market share.

The Path Toward Sustainable Energy

The key to solar’s growth is battery technology. It will allow households and businesses to store their own energy from solar.

With cheaper batteries available, solar will grow even faster than expected.

That’s why stocks such as SolarEdge, Enphase and SunPower have dramatically outperformed the market this year.

While we didn’t get the electric plane on Battery Day, cheaper batteries are accelerating the transition to sustainable energy.