4 Reasons No One Catches Tesla

Home » 4 Reasons No One Catches Tesla

4 Reasons No One Catches Tesla

Trigger warning: What you are about to read might sound offensive if you are a Tesla bear. Please proceed with caution.

But the new venture did not fare so well.

Each time Microsoft spent millions marketing a new Windows Phone, it was met with very little fanfare. Mobile consumers would flock to phone stores and return home with either a new iPhone or Samsung.

In 2014, Microsoft doubled down on its Windows Phone platform by acquiring Nokia’s Devices and Services division for $7.2 billion. A year later, it took a $7.8 billion write-down and announced the layoffs of 7,800 employees.

This is one of the biggest business mistakes of the last few decades.

Microsoft had entered the smartphone business too late to catch up to Samsung and Apple.

A similar situation is playing out in the race to dominate the electric vehicle (EV) market as Tesla’s decadelong head start looks insurmountable.

One of the bigger, if not the biggest, stories of the 2020s will be the battery storage revolution.

This will have a huge impact on the cars we drive, the way we power our homes and the environment. In the last 10 years, the price of lithium-ion batteries dropped over by 90%. And it will continue to drop into the 2020s.

The specific reason the automotive market will be transformed by cheaper battery power is less about the environment and more about economics.

In the next few years, the cost of producing an EV will be cheaper than producing a gas guzzler. And there are fewer moving parts in an EV, which means maintenance costs over the life of the vehicle are significantly cheaper. You’ll never need to change an EV’s engine, oil, coolant, transmission fluid or belts.

Cheaper, denser batteries will transform how we use energy — from cars to air conditioning to flying.

And since Tesla has the leading edge in battery development, it’s set to dominate this energy and automotive revolution.

Why Tesla Will Always Dominate the EV Space

While we might hear of traditional automotive companies launching new EV platforms, there are four key reasons Tesla is still best positioned to dominate this space:

These are four reasons why Tesla is uniquely positioned to dominate the EV industry in the next decade. It’s also why it has an insurmountable head start on the U.S. EV market: 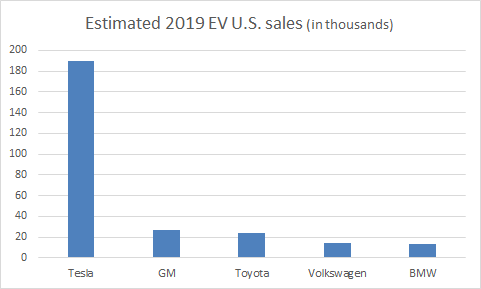 While Tesla is trading for an absurd 70 times 2022 earnings per share, if you look at where the company could be headed in the next five years, that multiple doesn’t look so absurd.

And if we’ve learned anything from the Microsoft phone saga, it’s that it can be nearly impossible to catch a clear market leader.

That’s why I look for these massive winners ahead of time — when the bears are still sure that companies such as Tesla are doomed to fail. It’s how I locked in a 550% gain on Tesla for my Automatic Fortunes readers — by keeping an eye on tipping-point trends that are changing life as we know it.

For more details on how you can profit from tipping-point trends such as electric vehicles, click here.