The New Era of DeFi Is Ready

Home » The New Era of DeFi Is Ready

The New Era of DeFi Is Ready

Early in my career, I realized something about Wall Street that holds true today.

The finance industry makes most of its money as middlemen in the capital-formation process.

The more capital that passes through the banking system, the more fees it collects.

In short, every bank’s goal is to market and repackage risk.

I saw this firsthand at Citigroup as an assistant trader on the U.S. Fixed-Income Syndicate Desk.

My job was to help market and sell the world’s biggest corporate credit bond offerings. It was the heart of the global financial system.

On some days, our desk would originate and sell over $10 billion of bonds for companies such as General Electric and AT&T.

In the early 2000s, my colleagues created a new way to repackage risk — the collateralized bond obligation.

It was a brilliant way to repackage and sell junk debt that nobody wanted.

Wall Street made billions from this new way to re-engineer risk. Credit was created at the fastest pace in history, leading to corporate and mortgage booms in the mid-2000s.

Those days were best summed up by Citigroup’s CEO Chuck Prince: “As long as the music is playing, you’ve got to get up and dance.”

When I realized how this boom would eventually end, I started a hedge fund that bet against my former employer.

In 2008, the music stopped, the lights came on, and we realized that many of the people dancing weren’t wearing clothes either.

I’m starting to hear the music again. But this time, it’s coming from an unlikely place.

It sounds very faint, like the distant sound of a violin in a giant castle.

It’s the sound of another re-engineering of credit, and it’s quickly getting louder.

I predict that this new tune will engulf the entire financial system in the next decade.

It will lead to a new credit boom that has a widespread impact on the global economy.

This boom will eventually end. But if you start dancing early, you can exit the dance floor way before the music stops.

The Evolution of Finance

The financial industry evolved with modern technology, dating back to the first transatlantic cable in 1886.

This new way of communicating opened the door to a global financial system.

In the early 1900s, the telegraph and Morse code brought about the first electronic fund transfer system, allowing for wires to be sent between banks.

Diners Club and American Express used these same technologies to introduce credit cards to the public in the 1950s.

Computer programs in the 1980s allowed for the securitization of mortgage bonds, as financial engineers could track thousands of homeowner payments in one spreadsheet.

Today, anyone with a smartphone can participate in the financial trade on the go with a few swipes and taps.

But the biggest evolution in finance — the place where the music is playing again — is at the intersection of blockchain technology and finance.

Cutting Out the Middleman

Blockchain is the underlying technology behind bitcoin. It allows for peer-to-peer payments without the need for a middleman.

When you send bitcoin to a friend, you aren’t relying on a bank or a financial tech company — the transaction gets recorded in bitcoin’s underlying blockchain.

Bitcoin is a form of money that can be sent as easily as sending an email. But it was only the first iteration of blockchain technology.

These crypto assets create “smart contracts” to recreate the financial system without bankers.

Most of DeFi is built on top of ethereum, the world’s second-largest cryptocurrency.

Ethereum rallied over 30% in the past week as investors flooded into DeFi projects. It’s starting to feel like 2017 again in crypto.

DeFi (Decentralized Finance) Is the New Wave of Finance

DeFi is bringing about a new wave of crypto assets geared toward eliminating the gatekeepers of credit and decentralizing the banking system.

In this new decentralized landscape, the role of tracking who owns what is tasked to the blockchain.

This will eliminate the need for banks and other central agencies to track ownership of real-world assets — such as stock certificates, property titles or auto registration.

Everything will be digital and recorded on a decentralized blockchain.

New DeFi protocols allow owners of crypto assets to lend their holdings in exchange for interest. This can be done simply with a smart contract, with no need for a middleman.

Right now, the base layer of this new financial system is growing exponentially. Here’s a chart from DefiPulse.com of the total value locked in DeFi: 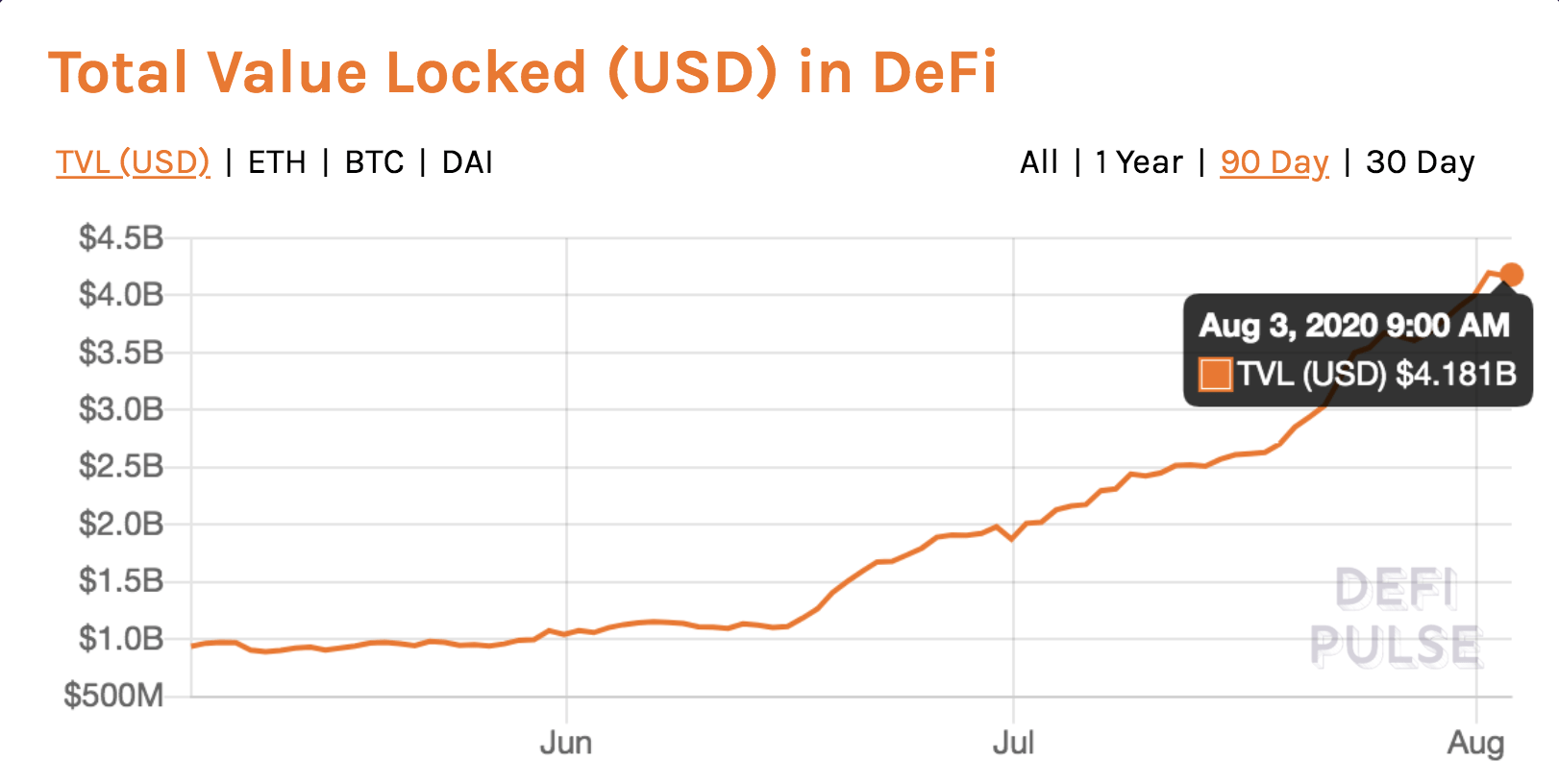 In the last 60 days, the dollar value of locked collateral has quadrupled, going from $1 billion in early June to $4.18 billion today.

The music is getting louder.

These pools of collateral are being used to create “stablecoins,” make loans and power derivative contracts. They’re also being used to bet on sports and political outcomes.

And many of Wall Street’s smartest minds are leaving their corporate jobs to help build the new wave of finance.

This ensures that DeFi will continue to expand rapidly, and the music will reach a fever pitch in the next few years.

You can dance to this music, but make sure to sit down before it stops.