Is the Federal Reserve Engineering a Recession?

Home » Is the Federal Reserve Engineering a Recession?

Is the Federal Reserve Engineering a Recession?

The Federal Reserve is running a con game.Strong words, I know. Especially for a trusted arm of the government…The Fed was established in 1913 to address a few problems — banking panics, the United States’ money supply, system risks in financial markets — you name it.To this day, its goals are to maximize employment, stabilize prices and maintain moderate long-term interest rates.That all sounds great.But from where I stand, it’s clear the Fed has lost sight of these objectives.Over the past century, the Fed has gone from a trusted, neutral institution … into nothing more than unelected bureaucrats with an ax to grind. If anything, they’re bent on influencing the economy and markets at their every whim.But wait, there’s more! There’s insult added to this crude transformation.We’re now in a position where the Fed is engineering a recession to undo its past bad deeds.In today’s Banyan Edge, I’ll expose exactly how the Fed plans to do this.And more importantly, I’ll share how you can sidestep the coming recession and keep your wealth safe.But first, let’s take a step back and identify where things went so wrong.We won’t have to go far…

The Bernanke Years: Money out of Thin Air

In my view, the crisis we face today all goes back to Fed Chair Ben Bernanke back in 2008.Feeling constrained by the limited powers of the Fed to raise and lower interest rates, Bernanke created a new type of scheme.He proposed that the Federal Reserve could just make money appear out of thin air.It would then use this newly created money to buy ailing government bonds, mortgage bonds and corporate bonds that were infecting the big banks’ balance sheets.Anything the banks didn’t want, they could just pile onto the Fed. It became a garbage disposal for the fat cats on Wall Street.This allowed those same banks to make fortunes off the taxpayers who bailed them out in the financial crisis.The Fed did this under the guise that it wasn’t really creating “money.” It was simply replacing those ailing bonds with reserves to the bank’s balance sheets. The banks could then use these reserves to make new loans.And rather than calling it a runaway money printing press, it came up with a gentler term: “quantitative easing,” or QE.Now, QE would’ve been a good, temporary solution to a big problem. It was that, or let the banks fail and take millions of Americans’ wealth along with it.But the solution wasn’t temporary. It became permanent.Here’s a look at how much the Federal Reserve’s balance sheet has grown since Bernanke introduced this idea in 2008.

Keep in mind, after the financial crisis and recession were over, Fed assets stood at just over $2 trillion.Today, the Fed’s balance sheet has ballooned to $9 trillion.That’s almost half of U.S. GDP. And it’s controlled by just a dozen unelected bureaucrats.I’ll admit — when the Fed first started QE in the depths of the financial crisis, it wasn’t a bad idea. We needed to fight the biggest onset of deflation since the Great Depression.By all accounts, it worked.But like a high school kid trying Whippets for the first time, QE became too addictive to quit.And whenever the Fed started coming down from the high, it went right back to the can!Bernanke started using this weapon of financial destruction to stave off any hint of a recession. His successor Janet Yellen did the same for years, even when the economy was booming.Current Fed Chair Jerome Powell even went so far as to more than double the Fed’s balance sheet to battle the economic impact of COVID. And we all watched this inflate the mother of all bubbles in 2020.Imagine how good it must have felt to push a button and watch every asset class — from real estate to bonds to stocks — go up.Sometimes it didn’t even need to push the button — Fed governors could merely hint that QE was coming. Similar to how a parent can make a toddler do anything if they promise ice cream. (OK, I may or may not have tried this a few times.)But now, the Fed faces a situation that pushing the QE button can’t fix: inflation.

After doubling the Fed balance sheet in 2020, the Fed is now fighting its own big mistake.Inflation is running rampant, and the Fed is raising interest rates to get it under control.As a result, there’s now a $9 trillion pool of assets that’s slowly draining out of the economy in a process called quantitative tightening (QT).The Fed is reducing its balance sheet by about $95 billion a month. It’s doing this by allowing Treasury and mortgage bonds to simply expire without replacing them with new assets. And it could even start selling these assets to slow down the economy.That’s why this year could be rocky. If inflation doesn’t continue to fall, there’s a risk the Fed could not only continue to raise rates — but also start to actively unwind this $9 trillion behemoth.That’s why I believe a policy error on the part of the Fed this year (and it’s made quite a few in the past) will lead to another economic shock.I’m not the only one bracing for impact… One recent startling headline from Yahoo Finance declared:

Perhaps this was a bit dramatic. But the fact is, the economic data isn’t softening as fast as the Fed would like it to.Each day that inflation doesn’t come back down to the Fed’s 2% target increases the odds it will engineer a recession to get there.That means we really could have a 5% fed funds rate in December of this year. If that happens, it could usher in another economic shake-up.I don’t want you to be caught off guard by the Fed’s desperation.So I’ve prepared your ultimate Recession Survival Guide — three ways you can recession-proof your portfolio right now.

One of the biggest mistakes I see new investors make is overleveraging their portfolios toward one asset class.For me, it’s simple. Think of your portfolio as a triangle. 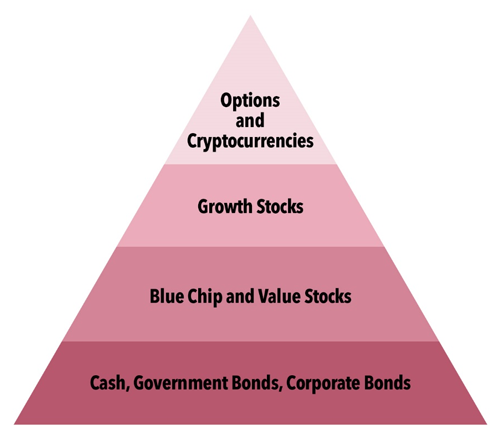 On the base, you have the safest investments. This should make up the majority of your portfolio. I’m talking about cash, government bonds and high-grade corporate bonds.The next layer moving up the triangle is blue chip and value stocks. This should be a smaller allocation.Next comes a bucket of growth stocks — a smaller allocation still.And at the top of the triangle, we have options and cryptocurrencies. These assets have the most risk — so naturally, you want to put the smallest percentage of your portfolio here.Now, this is just one example of how to allocate your portfolio. I can’t give you individual advice, but this “Triangle of Investing” is how I position my own investments.Once you have your allocation set, it’s time to…

My right-hand research analyst Amber Lancaster and I, for the most part, are optimistic people.We think there’s always opportunities to be found, regardless of the market.But even in good times, that doesn’t mean every stock is going to go up. Nor does it mean that you’ll time every stock perfectly.It’s a hard part of life, but it’s a fact.That’s why, when we look for companies for our Strategic Fortunes research service, we keep a sharp eye out for any potential recommendations with the following seven red flags.If any companies in your portfolio have these red flags, it’s time to let go!

Here’s the thing.As humans, we are emotional creatures. It’s natural, but it’s also the worst thing to be when it comes to investing.You might double down on losers to save face and try to claw back what you’ve lost. Or maybe you get jealous hearing how much money everyone else is making in a hot new sector. So you take on leverage in the hope of making one trade to strike it rich.You find yourself acting without having an exit strategy, forcing yourself to “ride out” your losers.This is the exact opposite of what you should be doing.The simple truth is, most investors simply can’t manage their own emotions.Fortunately, you don’t have to.As I mentioned last week, TradeSmith CEO Keith Kaplan has discovered a way to take the emotion out of investing — helping you to find the best time to buy and sell.And tonight at 8 p.m. ET, I’m sitting down with him in a tell-all webinar to lift the veil on exactly how he does that.To get notified when we go live, make sure to reserve your spot by clicking here.Hope to see you there.Regards,