Man, it’s been a wild couple of years for oil…Remember back in 2020, during the peak of the coronavirus? A barrel of oil actually traded below $0.It makes sense. With everyone hunkering down at home, no one was driving, and the entire world had an oversupply of oil. Sellers were put in the awkward position of paying to take oil off their hands!Nearly three years later, the opposite is true. Stocks of Big Oil companies are up like crazy.Take a look: 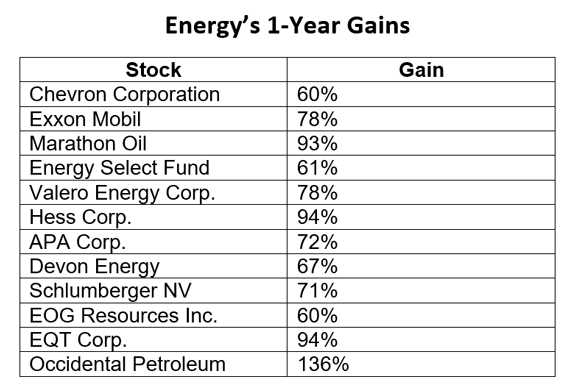 Experts expect oil to continue climbing, too.With the likelihood of easier money policies next year, the continuing Russian-Ukrainian conflict and the U.S.’s need to replenish its petroleum reserves, it’s a perfect storm for higher oil prices.(In fact, my colleague Adam O’Dell believes there’s a super cycle on its way that will propel oil to over $500 a barrel. And it could send one U.S. stock soaring 100% in the next 100 days.He’s going to reveal everything in his exciting new event tomorrow, December 28. If you’d like to attend, click here to save your seat. But hurry! Space is limited.)Funny enough, though, there’s another big opportunity that higher oil prices are fueling.You see, with higher prices, oil companies are racking in even more profits… And they’re using that cash to fund the last thing you’d expect.Renewable energy.At first glance, it makes no sense. Why would oil companies — whose very existence depends on fossil fuels — want to fund its eventual replacement?I go into all of that and more in today’s video.Click on the play button below to check it out.

And click here if you’d prefer to read a transcript.That’s it for this week! But remember, if you’d like to learn more about other big opportunities in oil, make sure to check out Adam’s webinar tomorrow. I know you won’t want to miss it.Regards,

← Am I “Insane” to Buy Crypto in a Bear Market?2023 Predictions: A Faster, More Severe Fed Pivot →