Big Data is a prime resource in powering the new era of opportunity. It shapes how we consume the world around us.

Today, we are more reliant on our connected devices than ever before. And this technology will transform the way we shop, travel and work.

But it’s much more than the basics…

It’s used as a tool to innovate businesses and create new technology. This new technology will be bigger than artificial intelligence (AI), 5G and the Internet of Things … combined. In fact, this technology is the key to unleashing each of these other technologies.

What Is Big Data?

This is all different types of information such as Apple Watch sleep stats, Google Maps routes, Netflix viewing history and so on.

These sets are used to identify trends and patterns.

This information is then used by a company to improve what it knows about a customer’s wants and needs so it can make sound decisions based on that data.

And it’s called Big Data for a reason…

To put it into perspective, 90% of all the data in human history has been generated in just the last two years alone.

And this is only the beginning. Industries are just now catching on to its potential.

What Is Fueling Big Data?

Big Data is a collection of information that a company (or app or individual) generates that needs to be analyzed and processed.

Data comes from a lot of different places. These range from social media posts and financial records down to internal emails and audio and video files.

When used correctly, Big Data enhances a company’s productivity and the quality of its products and services.

Fully processed Big Data can also help a business understand market conditions by analyzing consumers’ shopping habits, allowing the company to find out which products are top sellers and which are flops.

When you consider that over 329 million new devices (such as smartphones and tablets) are connecting to the internet every month, it’s not surprising to find out that 90% of all data recorded in human history has been generated in the last two years.

In fact, by 2021, the world’s data output will explode to 74 trillion gigabytes.

Someday, artificial intelligence could use Big Data to predict the places and blocks of time that crimes are likely to happen. Digitized medical records could improve doctors’ diagnoses and even decrease health spending by as much as 12% to 17%.

As you can see, Big Data isn’t just about finding something to watch on Netflix — it’s about saving lives and resources.

In Strategic Fortunes, we see Big Data as a tipping-point trend: It’s a trend that’s been building for decades and has now reached critical mass. In the next decade, Big Data will help us make decisions about everything in our lives … from the movies we watch to the food we buy to the route our self-driving vehicles take to work.

Founder and CEO of Dell, Michael Dell, says Big Data is “the next trillion-dollar opportunity.”

There’s a mad rush to get in. Coca-Cola, Comcast, ING, Nasdaq and TransUnion are all jumping feetfirst into Big Data.

In fact, 90 of the Fortune 100 companies are investing huge amounts of money.

Every major innovation in technology, commerce, health, transportation and banking will use Big Data.

Take the Internet of Things for example.

Within the next decade, there will be an estimated 150 billion networked sensors around the world.

That’s about 20 sensors for every human being on Earth.

This massive network will employ AI algorithms that are constantly communicating with each other, constantly learning and constantly interpreting data … turning it into useful knowledge.

And as Forbes said: “Artificial Intelligence Would Be Nothing Without Big Data.”

The Internet of Things alone is expected to generate 73 trillion gigabytes of data per year by 2025, as you can see from the chart: 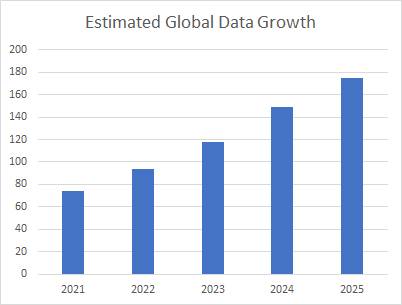 That’s an enormous amount of data in the world. Self-driving cars are another example.

That’s roughly 8 trillion HD movies’ worth of data per year.

That’s part of the reason medical error is the third leading cause of death in the U.S. Every year, millions of Americans die because of an unforeseen error.

But many of these mistakes result from simply not having accurate data. As a result, 80% of health data collected by doctors and hospitals sits in file cabinets or in computer systems in one office that are incompatible with other systems.

Additionally, patient-monitoring equipment blasts out 86,000 readings per day per patient.

Most of that data just sits on servers and never gets used. That’s like having millions of gallons of crude oil just sitting in barrels … waiting for someone to refine it into gasoline.

But the medical community has caught on that getting all this information refined can save the U.S. health care system up to $450 billion per year … potentially saving millions of lives.

Because with the right data analytics, what was just volumes of worthless information can now be used to add 10, 20, even 30 years to a life.

Or how people who respond poorly to one treatment can be cured by another, and so on.

Doctors will have precise data to help find the treatment that best fits the patients.

As McKinsey, the biggest market research firm in the world, noted: “A big-data revolution is underway in health care.”

And it’s going to save lives … potentially millions.

And as the Great American Reset expands, pushing America into its greatest economic boom thanks to the coronavirus rebound, Big Data will grow at an even faster rate.

As it grows, it will usher in the new era of tech — the greatest economic boom of our time.