America is racing into an exciting new era of opportunity…

The New Era of Opportunity

America is racing into an exciting new era of opportunity...

And it will usher in a massive tech boom ... bigger than any tech boom before it.

This growth will be so big that it will be felt from coast to coast. It doesn’t matter if you’re rich or poor ... millennial or baby boomer ... Republican or Democrat — what’s coming will be a massive windfall for every American.

The pandemic has pushed advances in certain markets faster than we could have imagined.

These innovations are already transforming our daily lives for the better.

They’re altering the way we live, work and play. And they will only get better from here.

We can see the first signs of these advancements taking hold:

And those are just a few examples of markets that have benefited from the pandemic.

The big picture is: This new era of tech is making room for forward-thinking, innovative companies that will thrive and propel the economy forward ... sending the stock market to new highs.

As with all major events in human history, this one will fundamentally change life as we know it. It will be one of the biggest accelerations in the tech market.

Many companies have switched their focus to keeping people safe, businesses running and students learning. We are seeing this adoption most in the new “work-from-home” movement.

Now that companies have their businesses set up virtually, there will be an enormous shift in the number of remote employees.

According to Gallup, 45% of people work partly or fully from home as of September 2021. This creates a different world where most Americans will work from home. But that doesn’t mean we’ll be stuck in our homes forever…

When we finally emerge from our home confinement, that’s when the Greatest Reset will begin.

When this happens, the economy will gradually improve, and Ian and his team expect the stock market to be at the head of the pack. It is, after all, a leading indicator.


What Is Driving the New Era?

One major reason the stock market will recover quickly from the current malaise is the Federal Reserve.

The Fed took unprecedented steps to flood the markets with liquidity — even more than it did in past recessions.

Its current quantitative easing program is more aggressive than it was during the financial crisis of 2008, even though banks are in great shape.

So, most stocks that survive the sell-off will have only one way to go — UP!

And Ian has the perfect indicator to find the stock best poised to soar.

There are three phases to it.

This is when a new innovation comes to market. It can take years to develop. Sometimes, even decades. Investing in this stage is high risk, high reward.

Then, it enters phase 2 — the velocity phase. This is when the real growth happens, as an innovation reaches a tipping point and becomes broadly used. It’s low risk, high reward.

Phase 3 is saturation. At this point, the innovation becomes the new normal. Everyone is using it. For investors, this is low risk, low reward. 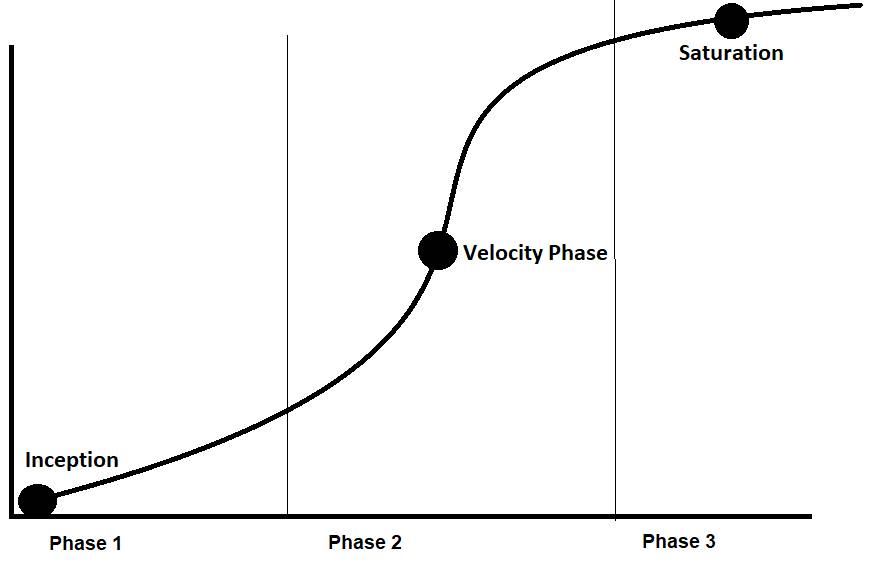 What Are the Tipping-Point Trends?

Ian King’s Strategic Fortunes focuses on tipping-point trends that will benefit the most in the new era.

These are themes such as: