“I want you to make his life a living hell … seriously.”

And he’s not the kind of man you want to make angry.

He’s the CEO of Florida Power & Light (FPL), the state’s largest power utility, which raked in nearly $3 billion in revenue in 2021 alone.

The Miami-based senator supported a new clean energy bill that threatened FPL’s bottom line … a bill that would cost the company up to $700 million annually.

For Silagy, the solution was simple.

Get rid of Rodriguez to get rid of his bill.

How is this possible?

Well, it’s not as hard as you might think.

Matrix billed FPL $3 million to take care of Rodriguez and his bill, then got to work.

Or at least it was.

For years, it operated in the shadows. But a recent feud between the firm’s owners thrust some of its biggest secrets into the light.

As a result, we know exactly what Matrix did to make the state senator’s life “hell”…

To get rid of Rodriguez, Matrix funded a “ghost” candidate with the same last name to run against him. Then it spent a fortune on political ads for its stalking horse.

The spoiler campaign was successful. Matrix’s candidate would later admit he’d been bribed to run, but the damage was already done. The vote was split, and Rodriguez lost.

His new bill was no longer a threat to FPL.

This is more than just a story of corruption though.

It’s proof that today’s utility behemoths feel the threat of a tectonic shift in the future of household power.

That’s why they’re throwing millions at the “problem”…

In 2020, FPL spent $10 million lobbying against solar — more than double what it spent just four years prior.

Through firms like Matrix, FPL has “donated” another $10 million for unethical political campaigns like what it did to oust Rodriguez.

And it’s not alone.

Alabama Power was also connected through Matrix to the North Birmingham bribery scandal that’s since been dubbed “Alabama’s Watergate.”

Even on the national scale, politicians aren’t safe.

President Biden’s Clean Electricity Performance Program (CEPP) has made even him a target. Four of the country’s biggest utilities spent $5.16 million over the last year lobbying against the president.

But these big utilities are fighting a losing battle.

Across America, dozens of utility providers are losing millions:

Bottom line: America’s biggest utility companies have had virtual monopolies on how we access power, but that’s about to change … and it’s good news for you and me.

An Overnight Revolution (138 Years in the Making)

The same kind of solar panels that President Carter installed on the White House roof back in 1979 … are suddenly an existential threat to America’s biggest power monopolies.

How is that even possible?

We’ve always been told that “solar is the future.” But for most of our lives, there’s been very little progress.

Even going back to the first solar panels Charles Fritts installed on a New York City rooftop in 1884, not much has changed.

But it’s starting to… 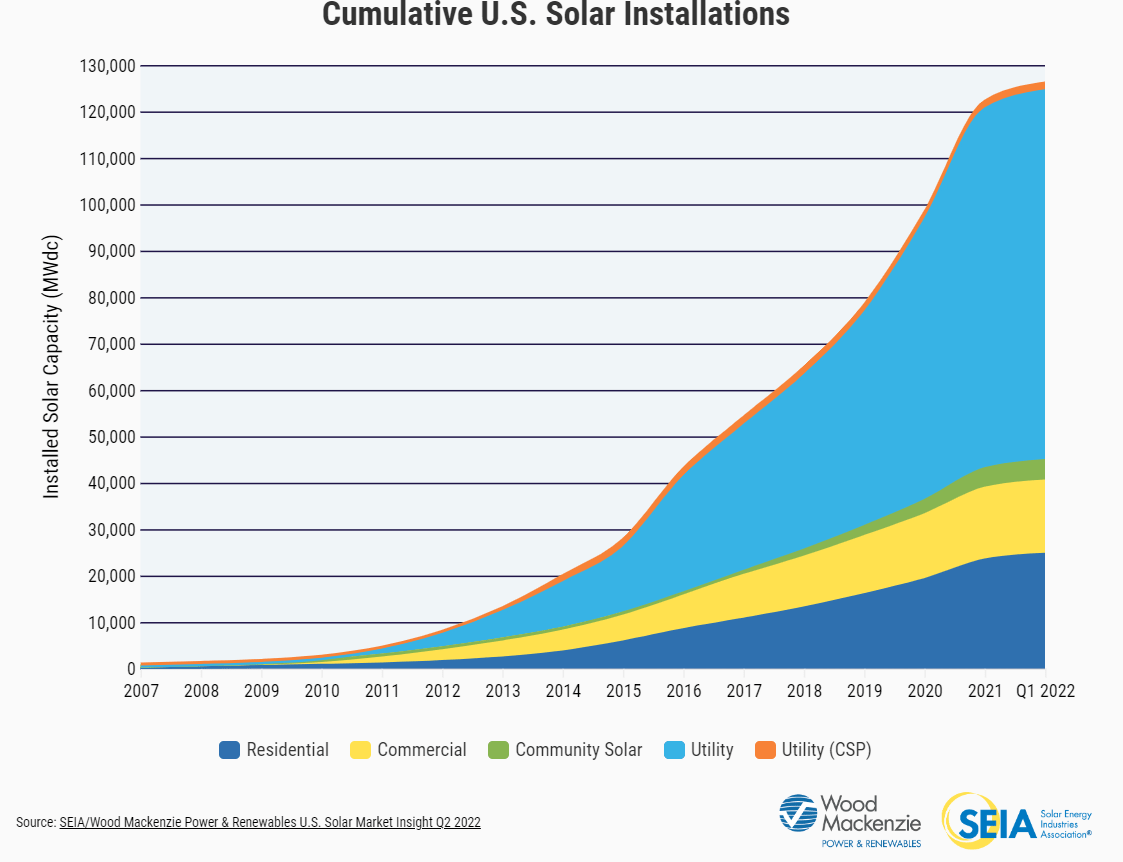 There are three key factors driving this massive surge in solar adoption:

What’s crazy about the solar boom is that it’s still in such an early stage.

Right now, solar only accounts for 4% of all U.S. energy production. And about a quarter of that is coming from one state: California.

Yet I can already see the early signs of mass adoption…

Solar Is Starting to Dominate the Competition

They’ve still got the classic Crayola design. But there’s a new banner, proudly proclaiming they were made with solar power: 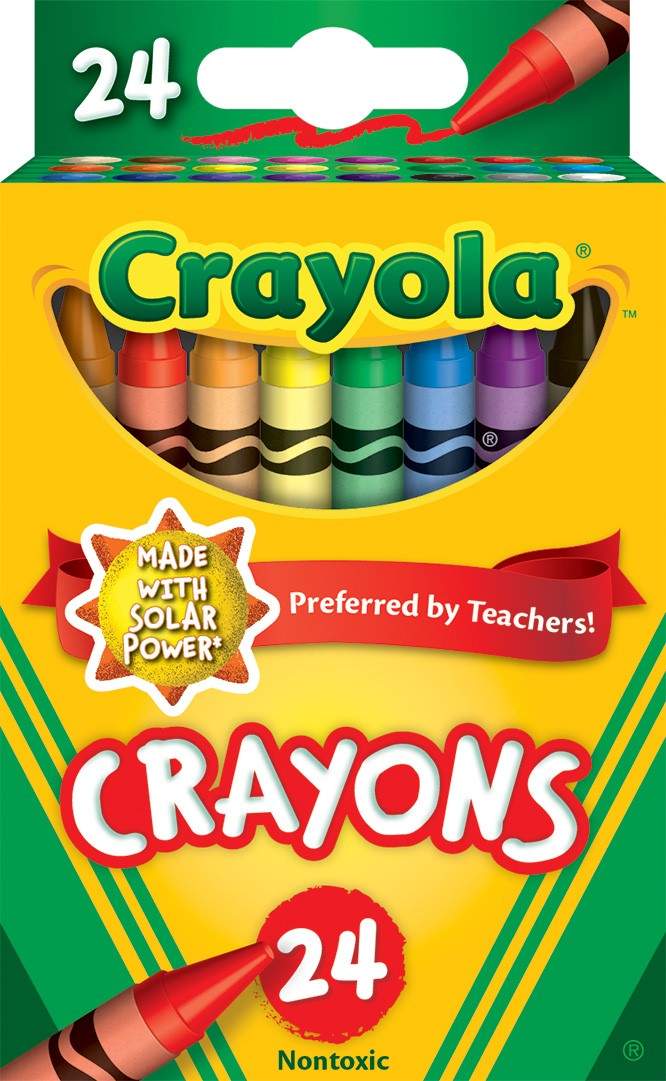 It’s not just a marketing tactic either.

Cities and municipalities are also going solar in a big way.

Over the last eight years, 15 different cities recorded a tenfold increase in their solar capacity according to Environment America.

The news gets even more amazing when you realize that just nine of those 15 cities now have more solar power installations than the entire United States had 10 years ago.

Even major retailers are turning to solar so they can cut costs and stay competitive.

Target unveiled its first net-zero location in March, with over 3,000 total panels and a solar carport to recharge your EV while you shop. 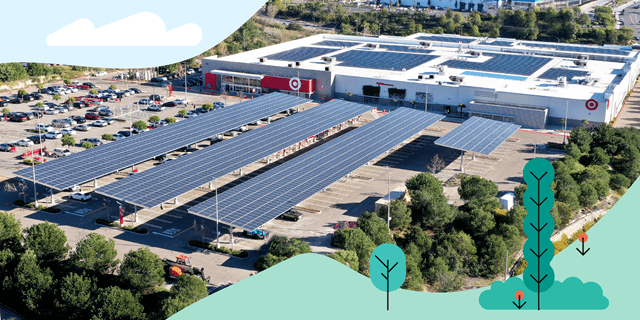 Walmart claims its solar installations provide 20% to 30% of each location’s electricity needs.

Fact is, the government, corporate America and now consumers like you and me are flocking to solar in droves.

Not surprising, when you get a utility bill that looks like this: 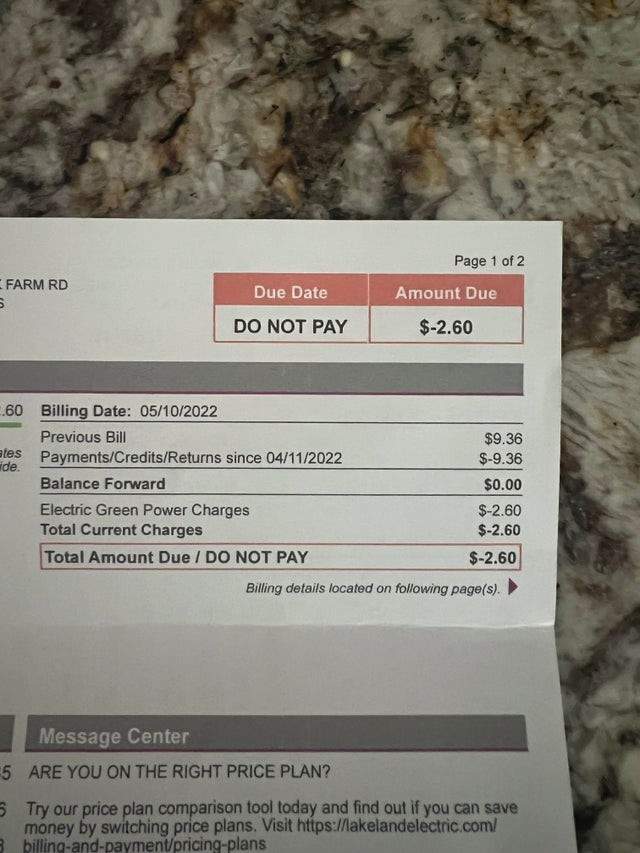 This bill from Lakeland Electric was posted to Reddit.

The user claims his brother-in-law was paying $500 a month prior to installing solar. Now, his Central Florida utility credits him $3 per month.

Getting paid by the power company doesn’t sound too bad, does it?

Especially when you stop to consider all the recent price hikes we’ve seen. Over the last three years alone, prices for utilities and fuel have risen substantially: 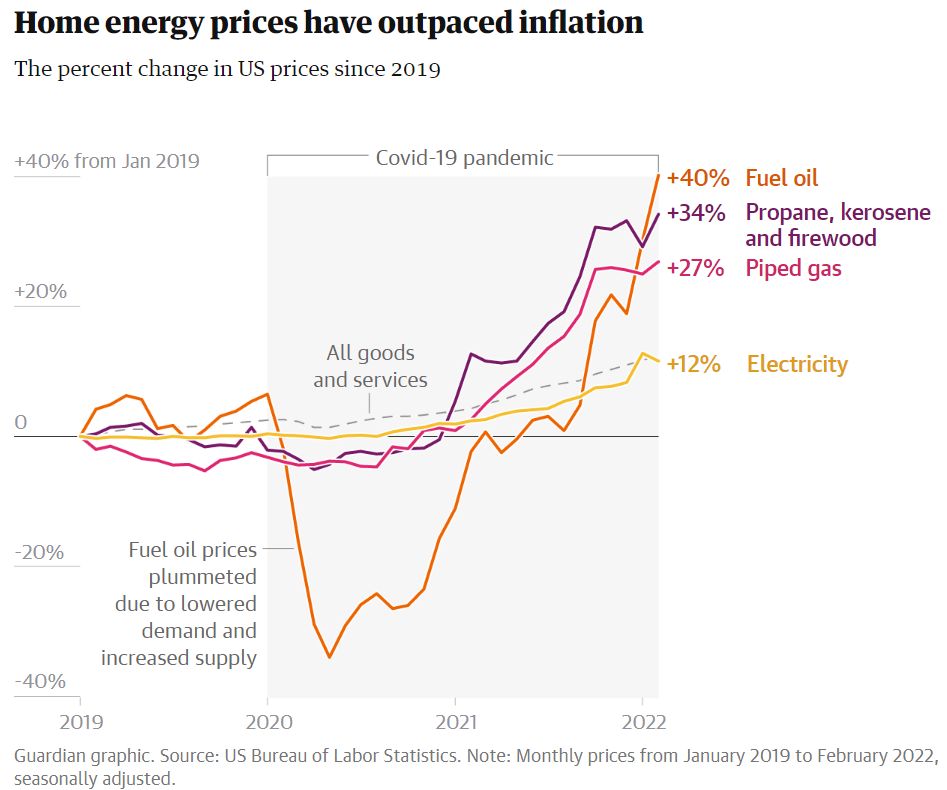 These utility prices are likely to keep going up.

Solar Is Becoming More Affordable by the Day

Meanwhile, solar is becoming affordable to the masses.

According to Swanson’s law, solar prices drop every time the volume of modules doubles.

So as adoption rates increase, prices will start to fall faster. Lower prices draw in more consumers … and the cycle repeats, going faster each time around.

The Department of Energy (DOE) estimates that half of all our energy will come from solar by 2050. That’s 1,150% growth from where we are today.

Precedence Research believes the solar market will swell to $368 billion by then, from just $197 billion today.

The Key to Mass Adoption Over the Next Decade

As great as all this growth is, the fact remains, there’s a BIG flaw with solar.

The average American household consumes most of its energy in the morning and evening. That’s when the majority of people are at home. During the day while we’re at work and the kids are at school, our homes are sitting rather idle.

But solar panel efficiency peaks between noon and 3 p.m. local time, when the sun is brightest.

So if you don’t have a way to store or transport the energy generated during these hours, it goes to waste.

On-site power storage in the form of lithium batteries. 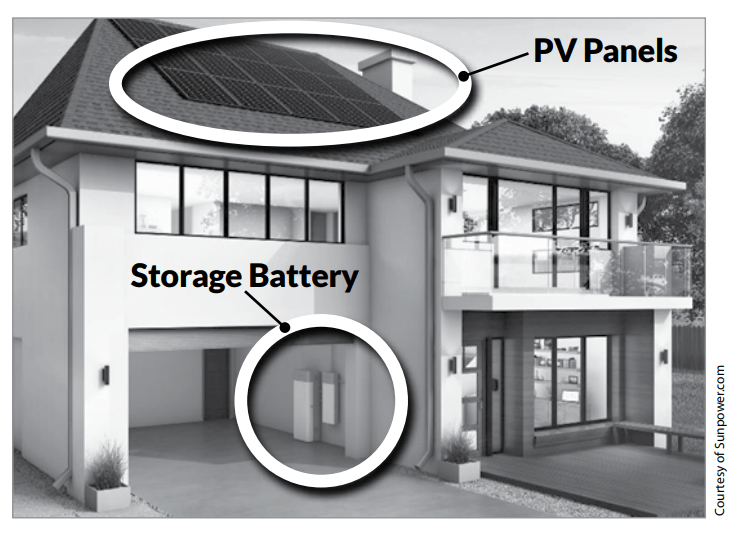 This isn’t a new idea.

Tesla’s PowerWall debuted in 2015, popularizing the idea of a home battery system.

But just like in electric vehicles, the cost of these lithium batteries has been prohibitive for most hard-working Americans.

The good news is, battery prices have plunged 90% since then. And it’s all thanks to advances in technology and manufacturing. 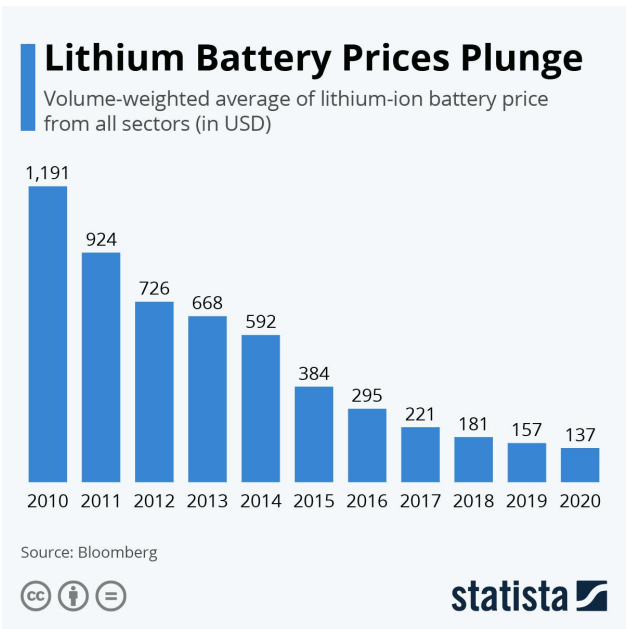 Nearly a quarter of all home solar installations are now being paired with battery storage solutions.

Statista says the global residential storage market will reach $26.4 billion by 2027 (up from just $5 billion two years ago).

Bloomberg estimates lithium-ion battery usage will grow at a 50% clip for the next five years, as more new solar installations begin using on-site storage. Over the next decade, it expects $262 billion in new investments for industrial energy storage.

According to this Bloomberg report:

The global storage market is growing at an unprecedented pace. Falling battery costs and surging renewables penetration make energy storage a compelling flexible resource in many power systems. Energy storage projects are growing in scale, increasing in dispatch duration and are increasingly paired with renewables.

Affordable energy storage is key to unleashing the true potential of solar power.

With on-site storage, you can finally unplug from utility companies and circumvent rising rates.

You won’t have to wait days for utilities to come back online after storms, hurricanes or blizzards either.

For anyone plugged into the grid, this is going to be revolutionary.

For investors, it’s the chance to make a killing.

And some of the biggest winners of this revolution will be from the up-and-coming power storage industry.

Through 2030, Bloomberg expects a compound annual growth rate of 30%.

It’s a great time to be a part of this market.

If you’d like to know more about one of my favorite renewable energy investments, just click here.

But what do you think?

Have you thought about going solar, either for your home or business?

What about an on-site battery or EV charging station?

Like I said, we’re at a fascinating moment in the solar adoption curve…

You may see solar panels every time you go out driving. My publisher, Larry, can’t get the solar salesmen to leave him alone!