This is exactly how I felt when Lehman Brothers went under in 2008.

A few days prior, it was one of the biggest banks on Wall Street. It had a storied history and $600 billion in assets.

Back then, no one could even imagine the collateral damage that this would do to the financial system.

All of Lehman’s counterparties (mainly other banks on the Street) were forced to write off billions in losses. This wiped out their profits for several years.

I had this same feeling during the COVID lows in 2020.

The stock market had dropped over 30% in just a month. Schools and businesses were shut down. Families were quarantined in their homes, disinfecting groceries with Clorox wipes. No one knew how badly the virus would disrupt the economy or our health … or how long it might last.

The stock market was like a night that kept getting darker. There was no sign of the sun coming up again.

History tells us that these darkest moments are when we should be buying (not selling).

Just a month after the COVID bottom, I stuck my neck out and made my biggest call at Banyan. In an article for Winning Investor Daily, I predicted that the “mother of all bubbles” was headed our way.

It was clear to see. The stock market had been purged of weak hands, and the Fed and government took unprecedented steps to strengthen the U.S. economy.

I called it right. In the following 20 months, the S&P rallied 83%. Cryptos fared even better, with Ethereum moving up over 10X. Solana rallied 100X. And LUNA, almost 200X!

Last month, crypto experienced one of these moments of total uncertainty. And I had that same feeling of existential dread…

The underlying assets were worth less than what the lenders owed customers.

A major crypto hedge fund, Three Arrows Capital, was then drawn in. At first it was only rumored to be insolvent — but then its bankruptcy was officially declared.

That brought forth even more selling. It seemed like things were starting to spiral out of control.

In the first three weeks of June alone, Ethereum dropped over 50%. Bitcoin sank 30%, falling below the psychologically important $20,000 price.

We hit peak uncertainty on June 18. That’s when Ethereum dropped below $900, its lowest level in 18 months.

But when everyone is rushing for the door at the same time, we see the most incredible buying opportunities.

In my June 21 article, I remarked that the fall of Celsius would be crypto’s turning point.

Back then, I noted:

This is a sign that there’s a price where smaller leveraged lenders will find buyers. Just as larger banks like JPMorgan and Citibank bought up smaller banks during the financial crisis.

Ethereum’s Price Over the Last Month 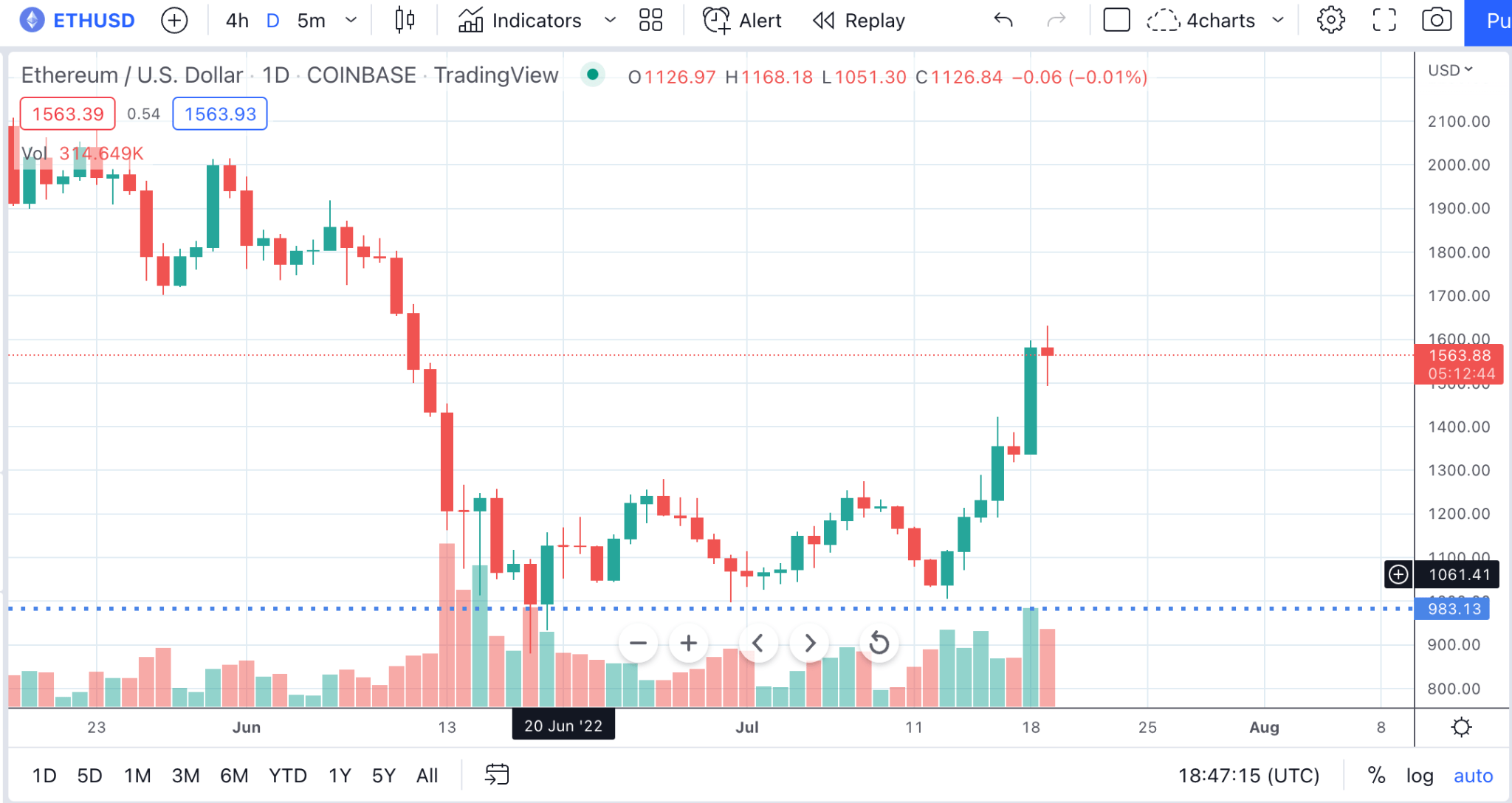 Since then, the liquidations have stopped. A month later, and Ethereum has nearly doubled off its lows.

This rally is telling us that the worst is behind us. The overleveraged bad actors have been purged from the market. The digital assets they once held are now secured in “stronger hands.”

With the big “merge” to proof-of-stake slated for September, Ethereum should continue to trade higher in anticipation of its biggest upgrade in history. So while today’s markets seem dark, crypto has only just begun to shine.

P.S. I just put together a presentation on a Next Gen crypto I think may interest you. It’s already starting to move. Just go here to see it now…