You’ve heard us talk about non-fungible tokens (NFTs) before — and how there’s no denying that they’re in a mania right now.

(As a reminder, NFTs are cryptocurrencies with unique properties, which means there can be only one of them in existence. A few examples are Bored Apes, Animetas and CryptoPunks.)

As it turns out, this market is just getting started. Monthly active traders have shot up 40X over the last year, while monthly trading volume has doubled in the last 30 days alone!

In today’s Market Insights, Steve Fernandez and I dive into the NFT world, why it’s in a mania and even its implications for the gaming world.

(If you’d prefer to read a transcript, click here.)

Ian King: Hey everyone, Ian King here with your weekly Smart Profits Daily webinar. Joining me again this week is my friend and colleague Steve Fernandez. Steve, what’s happening out there in metaverse land now?

Before we get going, I always want to remind you, please, if you like the content that we have to share with you today, go ahead and smash that like button. That helps us get our information out to more viewers, build our brand and produce a better product.

What Are Non-Fungible Tokens?

Steve, I am really excited about today’s topic. I mean, I’m so crazy about this. It’s a part of the crypto world that is absolutely going bananas right now. You may hate it, you may love it, but you can’t deny that there is a mania happening right now in what are called non-fungible tokens.

So, a fungible token of the cryptocurrency world, an example would be bitcoin or Ethereum, because the bitcoin that you own is the same as the bitcoin that I own. Anyone will accept it because it’s fungible. You can freely trade it, and either bitcoin should have the same value.

Steve, I know you’ve got some data you want to share with us. There’s a secondary market called OpenSea.io, and it’s a platform to trade non-fungible tokens. Tell us about the monthly volume on OpenSea for the last 30 days.

Steve: So, monthly volume has skyrocketed over the last 30 days. It’s more than doubled. But if you compare that to even just a year ago, it’s up 40 times in terms of trading volume. NFT sales are up 700X over the last year or so. Pretty rapid growth, like you described. You can’t deny the data, even if you don’t like the market. 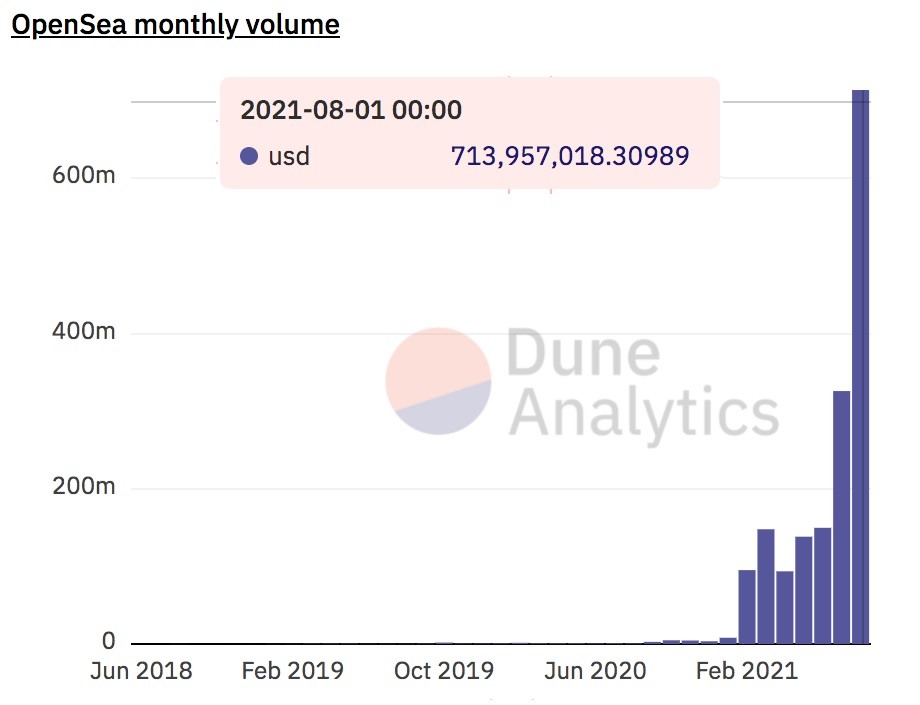 Ian: The most popular or well-known non-fungible token product on OpenSea is CryptoPunks. These are digital avatars. There were 10,000 originally created, and they sell for upward of $100,000. I think just a couple of days ago, a very rare one traded for something like $3 million. Christie’s has auctioned off a series of them for over $10 million.

Now, it has gotten people crazy over this because investors believe that this is sort of a new wave of art. It’s called generative art. Basically, what happens is a programmer writes a series of code and says, “Here are the properties.” And people go and mint these new animations or these new creations.

There are a lot of traders I see in these markets who are similar to the types of people who were buying GameStop and AMC that are sort of just aping into the NFT market right now. Tell us about the monthly active users on OpenSea, Steve.

Steve: Yeah, like I said, about 87,000 in July, so it’s up 40X since last year. You kind of described the idea of speculation. There are definitely people who like to collect these, and it’s turning into a market where people are just buying them now because they think that they can sell them higher in the future — and so far, that’s been working. 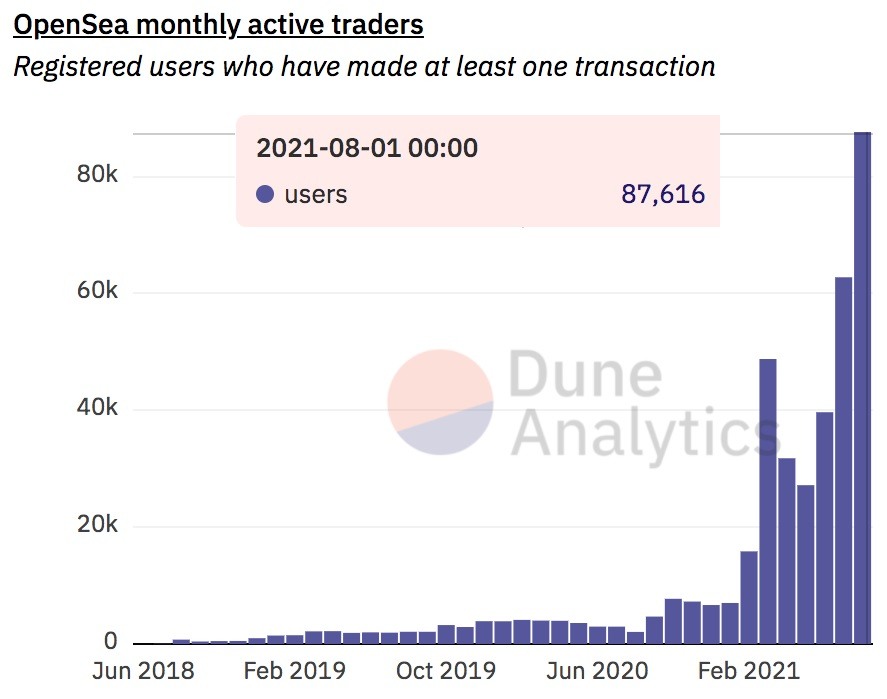 But regardless of the price change in the NFTs, the increase in volume in traders should attract new money to the platform as well, because there are more people buying. If you’re a seller, for example, you have more opportunity to sell, so it’s not necessarily a bad thing that that’s happening.

Ian: You know, I think in every mania we’ve ever experienced — whether it be special-purpose acquisition companies or cryptocurrency, or even going back to dot-com — when you have prices of a particular asset going up, it also starts to bring out supply. So, every other day, I hear of these new generative token sales.

It really started with CryptoPunks, and they moved on to Bored Apes, then they did badgers and then they did other apes and monkeys. They have all these different types of cartoon animals and anime characters that the space feels crowded, and eventually that supply is going to overwhelm demand.

I think it’s going to be one of those trades where investors sort of went in too heavy into this at the top, and then you have that sharp collapse. But I do think this world of NFTs, this technology, is here to stay, and it’s not just because of collectibles. Steve, you’re a gamer, right?

Steve: Yeah, I would say so.

With video games, it used to be all about getting the cartridge or a CD, like a disk. Then video games went to the cloud. And now what companies are doing is really sometimes giving you their games for free, knowing that they can convert revenue from you in the game.

In-game content is estimated to be about a $40 billion market now. And that can be content as simple as a costume for your character — they call it a skin — for example.

NFTs could potentially be used with skins, and we’re already seeing that in plenty of blockchain-based games. Then the video game players, the users, can take those skins and sell them to each other and collect them. So, it’s a huge opportunity for the gaming industry to start giving its users an opportunity to make money.

Ian: I love the idea.

Something we also discuss that’s really key about these NFTs is that when you create this piece of digital art, you can program it to do whatever you want. Some of these NFTs have code written in them that the picture or the piece of art actually changes over time.

I have one. It’s called a CryptoTrunk, which I basically minted for free. It basically follows my MetaMask wallet, and the tree grows the more trading and transacting I do. I thought it was really cool.

But another really interesting element is that the creator can also program that they get a cut of every time that NFT is transacted or moved from one wallet to another. So, I think it incentivizes more creators to want to build these digital pieces of art, and that could be like things you buy in games. What do you think about that?

If you’re a producer of content — whether it be video games, art, music — if you mint an NFT and somebody is trading that, obviously other people get the opportunity to make gains on their trades and their collection. But after the initial sale, historically, the producers have not made any money off that. There are royalties, but that’s a different type of income.

But with the NFTs, like you said, code can be built in where, any time that content is transacted, they get a tax, almost, on that sale. So yeah, I don’t see why more and more people wouldn’t be attracted to that kind of NFT production and going that venue, especially with the surge in activity.

People know that they can produce NFTs now and sell them, and now they have that added benefit where they can make money each time it’s sold in the future.

Ian: Yeah, I think the implications, which you hit right on the head, for the music world are going to be enormous. I think platforms like Spotify and iTunes are going to have a really hard time keeping the artists who get paid a very small percent of what the music actually generates for those platforms. This is actually to give more money back to the artists, and maybe music will become better again.

Ian: OK, let’s leave it at that. Any comments below. If you own any NFTs or have used OpenSea, we’d love to hear from you in the comments below. For myself and Steve Fernandez, thanks for tuning in. Have a great weekend, and we will speak to you next week. Take care.