Ethereum Will Be Bigger Than Bitcoin

Home » Ethereum Will Be Bigger Than Bitcoin

Ethereum Will Be Bigger Than Bitcoin

If I gave you a choice between owning all of the gold in the world or owning the entire internet … which would you choose?

Well, before you can make an informed decision, you’d have to figure out what would be worth more.

For gold, that calculation is easy.

Based on the current spot price of the yellow metal at $1,780, the value of all the gold in the world is around $9.2 trillion.

The internet, on the other hand, is harder to value. There are 50 billion devices connected to the internet that drive a large swath of the world’s commerce.

And the number of these devices is growing exponentially, meaning the internet will be even more valuable in the future.

Four out of the five largest companies in the world derive their value from the internet.

In 2014, Cisco’s John Chambers estimated the internet was worth $19 trillion.  It’s arguably worth much more than that now.

And you can’t forget about the internet’s impact on societies, governments and civilization.

And if you think the internet is more valuable than gold, that means Ethereum will be worth more than bitcoin someday.

Bitcoin is “digital gold.” It’s the world’s first widely owned cryptocurrency, and it has already survived multiple bull and bear cycles in its short decade of existence.

With a current market cap around $1 trillion, bitcoin is 11% of gold’s value.

One of the biggest misconceptions about bitcoin is that it will be used as a form of alternative money. Bitcoin maximalists expect it to replace fiat currencies such as dollars, euros and yen.

If that were the case, we would already be witnessing its widespread usage. But you don’t really see anyone using it to pay in the drive-thru at Chick-fil-A or for coffee at Starbucks.

Bitcoin maxis would argue that it’s only a matter of time before bitcoin’s underlying blockchain reaches the transaction speed of credit card processors.  Trust me, we’ve been hearing it for years.

Even if bitcoin’s speed eventually rivals my Visa debit card, that misses the point.  Why would anyone spend their bitcoin if they think it will significantly outperform fiat currencies?

So far, bitcoin has shown to be a store of value, but not so much as a unit of account. We don’t price anything in bitcoin except for other cryptocurrencies.

Bitcoin most resembles gold. You don’t spend gold, you buy and hold (hoard) it as a store of value.

If people aren’t using bitcoin as a form of money, it’s no replacement for fiat.

Earlier I asked if you would rather own all the gold in the world or own the internet.

In the past, an investor couldn’t own a piece of the internet — the underlying protocols such as simple mail transfer protocol and hypertext markup language are general-purpose technologies. You could only own the applications that benefit from the internet’s technology.

These applications, including Google, Facebook and Netflix, have become some of the biggest companies in the world.

Ethereum changes all of this.

It’s a decentralized virtual computer that provides a unit of account for the underlying protocols that power the internet. Not the current internet, but a future decentralized one.

It’s a base layer to create a new version of the internet, one that’s not dominated by the Big Tech companies.

This allows developers to create new types of decentralized applications — ones that can be run autonomously without a middleman.

For instance, a protocol that keeps track of government records such as driver’s licenses, property titles and marriage certificates.

Or one that matches riders with drivers without Uber charging a fee per transaction.

These are only some of the industries that a decentralized internet would transform.

What could be even bigger is decentralized cloud computing.

Rather than storing data on the servers of Big Tech companies, anyone who has extra storage space on their home PC or mobile device can add value to a decentralized cloud.

Ethereum’s Rise Is Just the Beginning

The narrative that Ethereum will be bigger than bitcoin is starting to take shape.  The price of Ethereum vs. bitcoin has been steadily rising since early 2020. 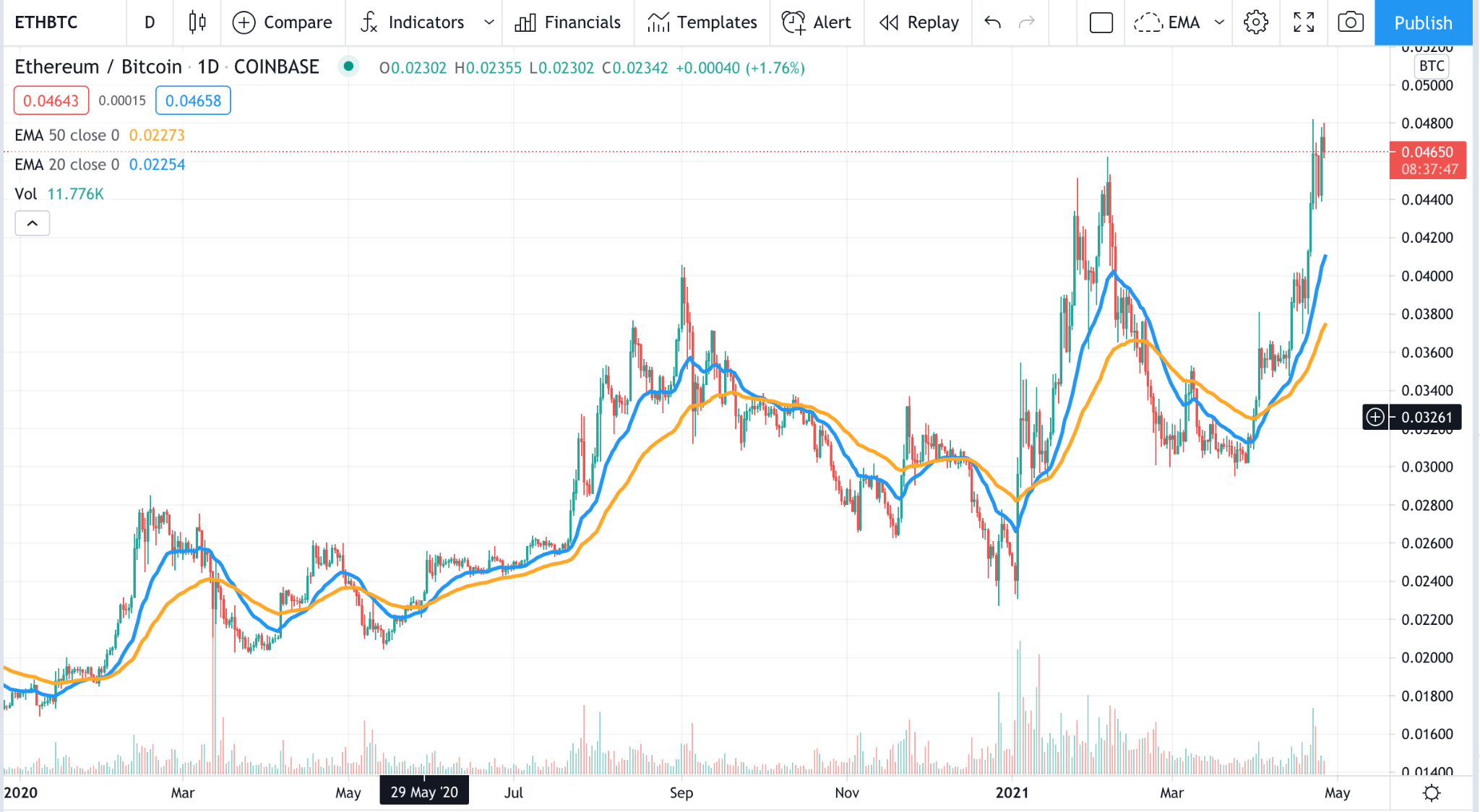 The price of Ethereum vs. bitcoin has gone from 0.017 early last year to 0.046 now. That means holders of Ethereum have done about three times better than bitcoin holders, even though bitcoin commands most of the spotlight.

This is just the beginning as new Ethereum applications begin to roll out over the next several years.

It’s also your chance to own a piece of the new decentralized internet in its infancy.

Of course it will be worth more than gold.

← Did Dogecoin Crash the Crypto Markets?Charlie Munger Is Wrong: 3 Misconceptions About Bitcoin →