3 Signs Tell Us When It’s Safe to Buy

Home » 3 Signs Tell Us When It’s Safe to Buy

3 Signs Tell Us When It’s Safe to Buy

A few years ago, I spent a late summer week on the Maine coastline at Acadia National Park.

One day after a 1,530-foot hike up and down Cadillac Mountain, I found a secluded beach nestled into the side of the hill.

It was August, and the air was clear and warm. There were a couple dozen sunbathers on the beach. A lifeguard sat atop his chair … but no one was in the water.

I imagined it was because the water was cold. But that wasn’t going to stop me.

I might not have had a chance to swim off of Maine’s coastline for a while, and the temperature didn’t bother me. I got a running start and dove headfirst into the ocean.

Immediately, I heard the lifeguard’s whistle.

As I surfaced and turned my head, he was waving frantically at me. As a former lifeguard myself, I knew that meant “get out.”

When I reached the beach, the lifeguard informed me that the ocean was closed because a great white shark had swum along the shore 15 minutes earlier.

He said they were going to wait an hour and then let everyone swim again.

He also mentioned he’d been guarding there for a decade and had never once seen a shark before today. It was just my luck!

I thanked him for the insight, and also wondered to myself if an hour was really enough.

That sounded like an arbitrary time frame, and I was confident that the shark would not abide by those rules. Perhaps I should just come back tomorrow (or never!).

I brought this story up because, for investors, it feels like swimming in shark-infested waters. Risk is everywhere you look.

While I can’t tell you when it’s entirely safe to swim in these waters, here are some signs I’ll be watching to see if danger is subsiding…

The health crisis brought on the economic and financial crisis. Watching how it develops will be key to determine when there’s an end in sight.

It’s becoming clear that Italy has gone through the worst part of its crisis, as new cases and fatalities are both below their March 21 peaks.

Coronavirus Deaths and Cases in Italy 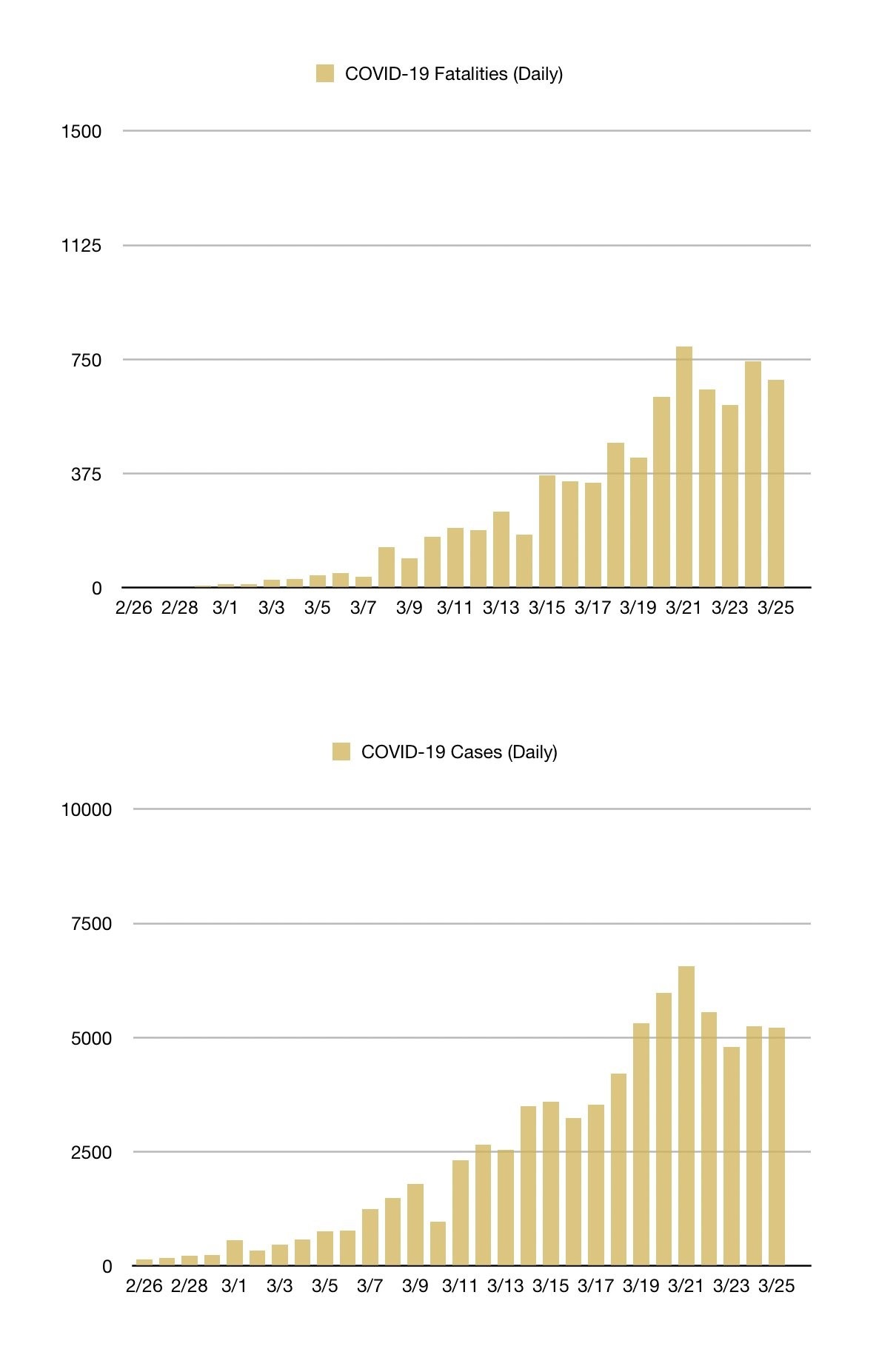 On Thursday, the U.S. added 17,224 new cases. That means the curve is still heading higher.

When we’re on the downside, then investors will start to see the light at the end of the tunnel.

No. 2: Stock Volatility Continues to Fall

When the VIX was at 85 last week, it implied investors were expecting daily swings of 5.3%.

Even with the VIX now at only 61, investors are expecting 3.8% daily moves.

The VIX Dropped to 61 — but That’s Still Extremely High

And with expectations running high, it doesn’t take much for those types of swings to become a reality.

In times of high volatility, market makers reduce the risk they’re willing to take. That means when sellers step in, scared buyers move out of the way.

A few weeks ago, when it looked like a shutdown was inevitable, most companies rushed to raise cash.

Facing a sudden shortfall in revenue, they drew down credit lines and other types of borrowing.

This impact sent junk bond prices cascading lower and rippled through the rest of the fixed-income markets.

I’m keeping my eye on the SPDR Bloomberg Barclays High Yield Bond exchange-traded fund (NYSE: JNK) for signs that conditions in the credit markets are improving.

JNK Is Starting to Rebound

The Waters Will Be Safe Again

These are my three tells: a slowdown in new coronavirus cases, a pullback in volatility and a junk bond rally.

When these come together, it will be safer to get back in the water.

Of course, you can jump in now. Just be ready to get out quickly if you see the lifeguard standing up in his chair.